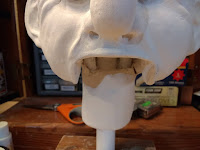 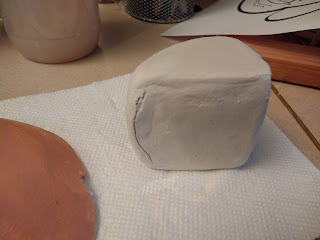 My first intuition is to sand the jaw, then place it back into the head... somehow... temporarily... then finish the head sculpt around the jaw. I want to add a double chin under the jaw area. With the jaw in the head, I'll also add a larger protruding lip to the jaw.

At some point, I will remove the jaw and sculpt teeth and tongue behind the faint pencil line you see on the jaw. Finally, the plan is to seal the jaw cavity in the head in such a way as to make it easy to remove on casts of the head.

The goal is to create a separate jaw that slides easily, but tightly into the head casts with as little gap adjustment as possible.
Posted by Kenny Croes