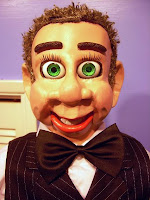 This silly little feller is now available on Ebay.  He's a "Henry" character, and what a comical character he will be when he finds a straightman (or woman).

On another note, I'm pleased to say his distant cousin "Durwood" finally made it to Austria (via USA to Australia to Austria).  The little globetrotter made it safe and sound having accumulated several thousand frequent flyer miles.
Posted by Kenny Croes 1 comments 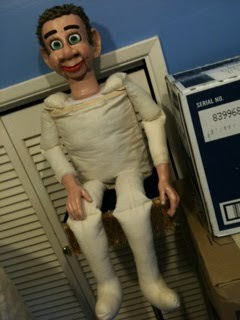 Amid the stacked boxes sits a new "Henry" almost ready to move... like me.  Only we'll have separate destinations.  I'm moving to Bandon.  He'll be moving somewhere else in the world.


This little fellow has very nice green eyes with plastic irises. He'll get a snappy wardrobe and a matching pair of shoes.  He'll also get a loony back story when he's finally listed on Ebay.
Posted by Kenny Croes 2 comments

"L" of a difference 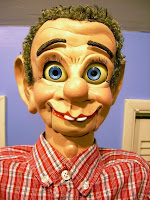 This little fella (dubbed "Durwood") was shipped to Austria to meet his new partner.  Unfortunately the US Post Office sent him to Australia instead.  It's amazing how the single letter "L" can literally make a world of difference.

In checking the tracking, the Australia Post confirms that they received the package and they are aware the destination is Austria.  The last entry states the "the item has been lodged".  I don't know what that means, but it sounds ominously like a holding pattern.  I hope they release Durwood soon so he can start his yodeling lessons sooner rather than later.
Posted by Kenny Croes 1 comments 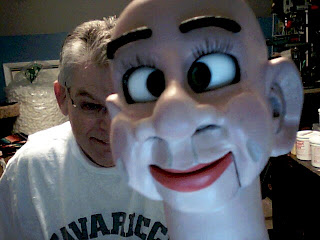 Oh well, I don't have a mustache/beard anyway.
Posted by Kenny Croes 6 comments

I learned to make an axle and pulley system to open and close the jaw from Al Stevens' "Fred Project".  That's the pulley on the right.  The pulley is actually a screen door pulley, available at your local True Value Hardware store.  The pulley on the left helps cross the eyes.  It's the first time I've placed two pulleys on the same axle.  For crossing the eyes, I used to slip a 1"-length of brass tubing over the axle, and the cord would pass over it.  But adding a second pulley actually works better.
Posted by Kenny Croes 2 comments

I have an idea. If I still performed regularly, I'd steal the idea myself. :-)

Most ventriloquists (and all I've ever seen) usually give their figures a different voice than their own. Kid and baby figures get high squeaky comedic voices, old guys get... well... old guy voices. Cheeky boys get smart-aleck kid voices. But I've never seen a ventriloquist adopt the silly voice permanently as their own, and give their signature character the ventriloquist's real voice. (This is what I think about when I'm not installing eyebrows on foreheads).

The vent with the silly voice could converse with a bevy of other figures with different voices, too. (Think Pee Wee Herman and the playroom of characters he converses with.)

Or, an act could consist of vent AND figures each playing different roles in each routine. For example, Smart Sheriff vent and Dumb Deputy figure, French maitre'de vent and Red Neck diner-figure, Grizzled Baseball Manager vent and Incompetent Baseball player-figure. Back in the 50's, Paul Winchell would do some of this on his TV show.

Or is everybody already doing this and nobody told me about it.
Posted by Kenny Croes 4 comments

Clinton Detweiler again turned to my "Uncle Earl" head to recreate the notorious chicken thief Abe Buzzard.  I'm always surprised and delighted to see the many variations of character that can be created using the same cast head.
Posted by Kenny Croes 0 comments

Earl by another name 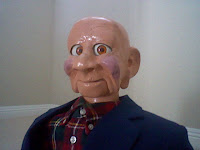 This photo was sent to me by a ventriloquist named Connor.  He purchased an Uncle Earl head from the Kenny Croes Collection at Braylu Creations and built himself a dummy.  Connor calls his new pal "Clarence".

Will he learn to yodel? 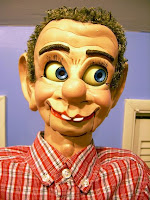 I put bigger eye sockets and a pair of Mike Brose eyes in an Elmore head.  The result is "Durwood".  He'll soon be on his way to Austria to meet his new pal.

My blog and dummy-makin' may slow down for a short while as I pack everything up and move to a new home.  Among the cool things about my new residence is I'll get a 400 sq.ft. workshop out of the deal.  You may recall that I've been doing my work in a small upstairs bedroom all this time.  It will be wonderful to have much more room to build and create.
Posted by Kenny Croes 0 comments