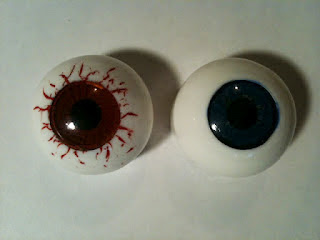 Inspired by "Scarface", a client has requested a scary Mr. Winkle. He also asked for two different colored eyes... one blue, one red.  ("Scarface" had two red eyes). My customer also encouraged me to have some fun building the spooky old guy. So I clipped a single strand from a medium-sized house-painting brush and dipped it into cadmium red acrylic paint. I dragged the strand across the white portion of the eyeball to get the bloodshot veins in the red eye.

And yes, it was fun!
Posted by Kenny Croes 4 comments

What I was looking faux 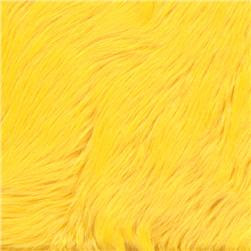 I cut down blonde costume wigs.  My little guy didn't look right. I tried painting pieces of foam with yellow acrylic paint, thinking I'd give him a space-age crew cut. But painted foam looked weird. I searched the web for all kinds of materials that might look like shaggy blonde or yellow hair. I finally went with yellow shag faux fur at $21.00 a yard. I also bought a yard of brown faux fur to get free shipping. (I previously searched the fabric aisles of my local Joann's Fabrics, but they didn't carry it.  And Joann's is the biggest fabric store in my area.)

How dry I am 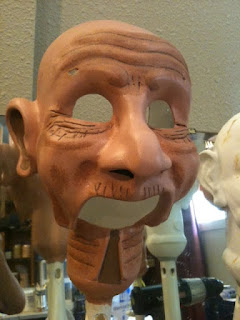 I'm trying out a new painting technique. It's dry brushing using a stipple brush. The first step was to use a fine-line paint brush and paint in the wrinkle lines with raw umber. Then I used a stipple brush dipped in a darker flesh color and dabbed the brush onto a paper towel until the pattern was... well... stippled. Then I dabbed the brush over and around the wrinkle lines. Next I will stipple with regular flesh color around the darker stippling to fine-tune the look.
Posted by Kenny Croes 1 comments 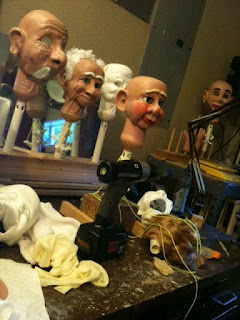 After a 10-day vacation break, I'm back in the workshop. I have a repair to attend to, a scary Mr. Winkle to build, a full-size Uncle Earl to dry brush, and a Henry to make blond. Oh yeah... and there's a 2T Uncle Earl in there somewhere just begging for some attention.
Posted by Kenny Croes 0 comments

We went back to Peet's Coffee this morning and we noticed that someone took my business card from their bulletin board. How funny is that?! We posted another one, so we'll see if it's still there tomorrow morning.
Posted by Kenny Croes 0 comments 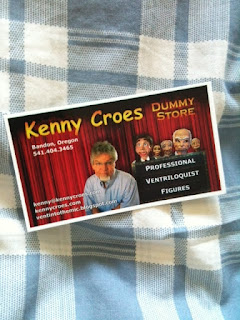 Just before the ConVENTion, I printed up a bunch of business cards. Since I wasn't going to do a dealer table, I figured I should have something in case someone asked who the heck I was and why the heck was I there. Well, I didn't hand out a lot of them, but they did come in handy now and then.

I'm visiting my brother in Southern California. And he posted one on a cork board at a Peet's Coffee. Someone might get a giggle out of it.
Posted by Kenny Croes 0 comments 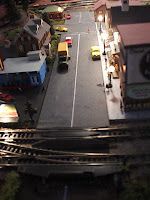 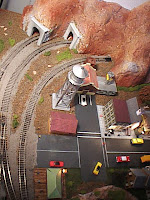 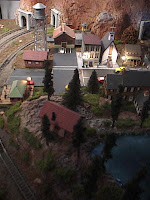 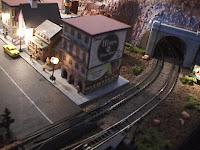 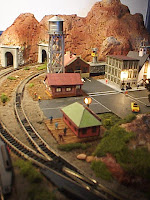 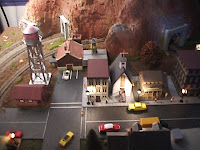 Before I drifted back into ventriloquism, I picked up the model railroad bug for a couple of years.  While visiting a toy store in Southern California, I spotted an "N" gauge train tableau.  I'd never seen such a small electric train size before and I was captivated.  Next thing y'know, I'm buying plywood, train engines, track, cars, miniature people and I'm fabricating my own buildings.  I built a double-tunnel, a lake and an entire town (which I named Sierra City).

Like many electric train enthusiasts, once the tableau was completed, I stopped playing with it.  So I sold the whole thing to a broker who pieced it out to other model railroad nuts.

For the luv a Pete

The wonderful Pete Michaels has a new promo video out.
I'm sure you'll agree he's an amazing entertainer!
Posted by Kenny Croes 0 comments 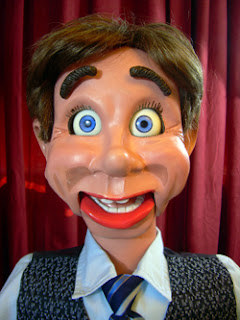 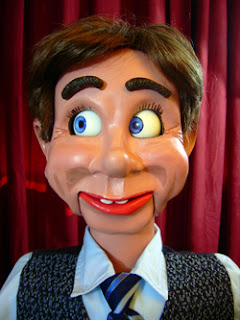 I just completed another "Jackie" figure for a client.  I added buck teeth to Jackie, which is my favorite look so far. This fella has side-to-side eyes and raising eyebrows. Working on the full-size characters is such a pleasure.
Posted by Kenny Croes 0 comments 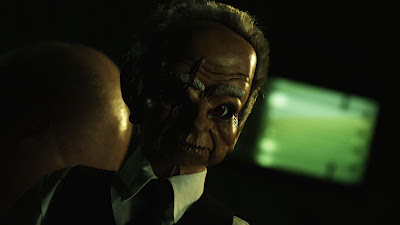 I'm very pleased to report that the fan film Batman: Puppet Master got made by Director Bryan Nest. As I mentioned in an earlier post, my custom-built "Mr. Winkle" figure got the part as the evil dummy, Scarface. I think the short film turned out quite well. Hope you enjoy it, too. 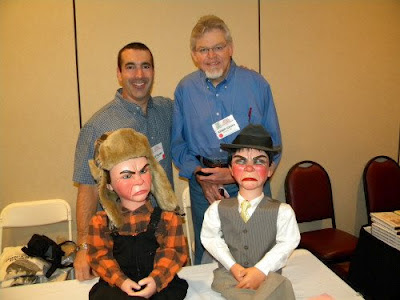 Fellow figure maker Mike Palma and I stay in touch.  I read his blog (c'mon, Mike. Post more often.  We LIKE it). He reads my blog. I post, comment and "Like" all the time on the Facebook group he started, Ventriloquist Workshop. We occasionally trade secrets and general figure making gossip. He makes splendid figures which you see in the photo of Mike and me at the conVENTion. (It was pointed out that he and I are smiling, while the two figures are both frowning).

But I digress. I wanted to point out the video of his very funny performance at the VentHaven ConVENTion.  The Asian figure he's talking to was made by Larry LaFontsee, another fine figure maker.  Mike Palma made the little Buddha. The crowd loved the act. 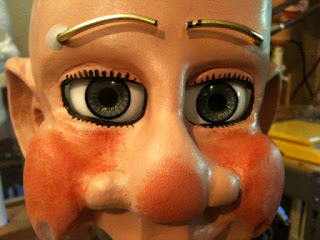 I like the new 1.25" eyes from Braylu Creations even more now that I've installed them into a figure. The new white material has a smooth, soft and wet look. The flat back seems to work fine. However adding additional eye animations requires checking that new gizmos will stay out of each others' way. I shaved the back side corners to accommodate my crossing eyes.  Not a big deal.  Just be sure to check.
Posted by Kenny Croes 0 comments

A very enjoyable short film featuring Jay Johnson.  Click HERE to enter to win tickets to the filming of his show "THE TWO AND ONLY" on September 15th in Wilmington, NC.
Posted by Kenny Croes 0 comments 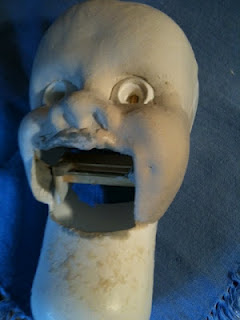 I'm reminded of the Letterman bit "Is It Anything?" As far as this new sculpture goes, it's still too early to tell.

I completed his left cheek today.  The dimple turned out okay. I'll let it dry completely before I attempt the right cheek.  When the upper lip is done, I'll be able to determine if this guy is cute or in desperate need of plastic surgery. 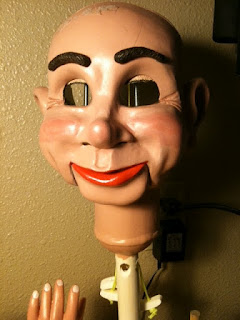 I've had an issue with a sticking jaw on the very first Jackie I built. (It was always my intention to keep the first Jackie, so fortunately no one had to send him back for repair).

I tried to affect the repair from the outside, but I finally reached the conclusion that I had to pop open the head to really fix the problem. And since I'm always making improvements on my figures, I decided to disassemble the entire dummy and replace all the mechanics while I'm at it.  Well, what I learned was I make a VERY solid figure because he hasn't been that easy to deconstruct.  It's going to take some real muscle and some heavy-duty tools to pry this fella apart.
Posted by Kenny Croes 0 comments