I was chosen by the previous audiences to perform at the "Best Of Opry" this past Saturday night and a Sunday matinee. Both performances went well, but I couldn't help but notice that Saturday night audiences are much more lively.

They laugh louder at the jokes, they laugh more often and they applaud with more gusto.
Posted by Kenny Croes 0 comments

Two eyes are better than one

Both eyes are now installed in Charlie2. Again I mounted each eye separately because the Charlie McCarthy dolls have uneven eyes. Possibly that's because of the monacle.

I realize you might not be able to follow the above explanation, but I had to tell somebody!
Posted by Kenny Croes 0 comments

The last step for Charlie1 is some facial shading. My wife lost a bet, so she has to do the final painting this weekend. She did such a nice subtle job with my Brose figure, I'm sure her final touches will be great. Nevertheless, I have posted a trio of photos of Charlie1 with hair!

Charlie2 now has a right eye. I ran out of ApoxieSculpt, so I have to wait a day or so to get the left eye in. Right now, he looks rather evil with his one eye. ARGGGHHH!
Posted by Kenny Croes 0 comments 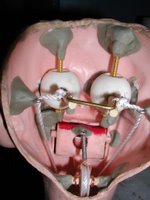 After careful thought, precise examination, measured consideration and several dreams, I decided to forego self-centering eyes. I think I should quit while I'm ahead.

I have seen to a few details and I've sealed the head. Next the wig, a shirt and he's ready to go. Considering where Charlie1 started, he's going to turn out pretty good. I learned alot and Charlie2 will be the benficiary of all those lessons.

Final photos of Charlie1 coming soon to a blog near you!
Posted by Kenny Croes 0 comments

To center or not to center...

The way I have constructed the eye mechanics, there is currently no centering mechanism. I prefer NOT to use springs as posts behind the eyes. I like wood dowels with a round brass synchronizer inserted in small holes in the dowels. There is a way to attach a spring to the center of the synchronizer and to the back of the trap door, but that seems inconvenient if one ever has to get back into the head.

The Ups and Downs of Eyes (That Move Back and Forth)

As you can see from the photo, the eyes have been intsalled in Charlie 1. The synchronizing mechanics have also been installed and the whole thing works!

What's so interesting about building vent figures is the manic-depressive nature of the progress. Yesterday I was really pissed off. First, the right eye fell out. Then I decided to alter the shape of the eye sockets with the eyes installed (FYI: Not a great idea). After baling on that and cleaning up the mess, I turned out the lights and went to bed (depressed).

Then I dreamed about installing eyes all night (not the first time, I might add).

Today, the eyes are solid, synchronized and I'm back to manic. Now come the controls.

Where DID I put that bottle of Zanex?
Posted by Kenny Croes 0 comments 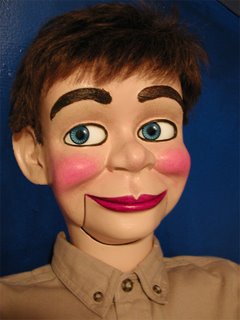 Last evening I took Jackie to my haircutter for a trim. The wig I bought for him was a short hair woman's wig, but it still was too full and bushy for a "l'il guy". So after about 2 hours, Jackie came out looking kinda cute... and more like a boy.

What do you think?
Posted by Kenny Croes 2 comments 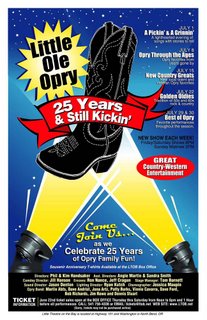 Every in year North Bend, Oregon, there is a series of wonderful shows at Little Theatre On The Bay. Now in its 25th year, "Little Ol' Opry" presents local Country & Western talent Saturday nights in July. The quality of performers never ceases to amaze me. The format is similar to the Grand Ol' Opry. It has a terrific stage set with hay bales or tavern tables on stage for performers to sit and watch their fellow performers. There's an excellent live band that accompanies most of the singers.

The theater itself is an old 1920's movie palace that was converted into a performance venue in the 1950's. It seats 385 and has great lights and sound.

In between singers, a comedy team in the HeeHaw tradition performs short skits. They're corny, but they do make you laugh! And then there's the Opry Dancers. A dozen young beauties who could give The Rockettes a run for their money. They do 4 or 5 routines during the show, as well as serve as cheerleaders for energetic audience response.

Wearing my bib overalls costume, I performed a short comedy routine with my little dog Chester. After the routine, an Opry Dancer took Chester offstage and I accompanied myself on guitar and sang the Sons of the Pioneers' tune "Cool Water". The audience seemed to enjoy my act, so it was a fun evening.

If you ever get to North Bend, Oregon in July, definitely put "Little Ol' Opry" on your itinerary.
Posted by Kenny Croes 2 comments

Charlie 1 is coming along nicely. His head, as you can see in the photo, is now attached to the Braylu-built post. I installed his mouth with a brass axle. It threads through a pulley ala Fred Project. Though I'm a lefty who prefers thumb action for the mouth, I'm building Charlie 1 with right-handed controls. The index finger of the right hand will work the mouth lever. The eye controls will be manipulated with the right thumb using a rocker control. His eyes will be the Bright Blue eyes by Mike Brose.

I also purchased some curley brown fleece to possibly use for hair instead of a wig. If it works for Charlie 1, I also might use it for Charlie 2.

Speaking of Charlie 2, my wife is lobbying for a "5 o'clock shadow" on his face. She thinks he'll look good as a ruffian. I'm warming to the idea!
Posted by Kenny Croes 2 comments

That Mike Brose guy (of Puppets and Props fame) is sure smart. I was reviewing his book "Figure Making Can Be Fun" to get some guidance on eye mechanics. As mentioned before, the Charlies' eye sockets are irregular and will require individual set-ups. No single platform will work very well.

So... goofy me... I made two separate platforms for each eyeball. That strategy was not working well at all. Then I re-read his section on irregular eye sockets. Mounting a pivot bar for each eyeball (sans platform) makes a lot more sense. I bought the hardware today and I'll attempt this new approach tonight, which seems infinitely more promising!
Posted by Kenny Croes 2 comments 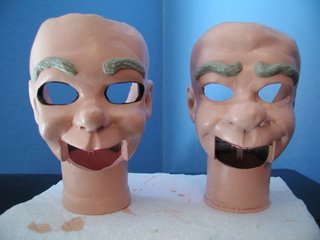 Charlie 1 and Charlie 2 continue to confound, elate, disappoint, teach and amaze me. Today I added eyebrows to both heads. Makes a BIG difference. I've also assembled the bodies.

I'm using Braylu wood framed bodies for the Charlie's. One is the 30-inch figure variety, the other is a 34-inch figure variety. I used a thin sheet of plastic to cover the fronts of the body frames. I stapled the arms and legs on both figures. I've used fleece to cover the shoulders and butt. The fleece covers up the staples, too. Looks neater.

I had a little ApoxySculpt left over, so I built the first support for the left eye platform in Charlie 1. I have to use separate platforms for left and right eyes because the Charlies' eye sockets are quite irregular. Hope the mechanics work okay.

There could be another "confound" and "disappoint" period in my near future.
Posted by Kenny Croes 2 comments 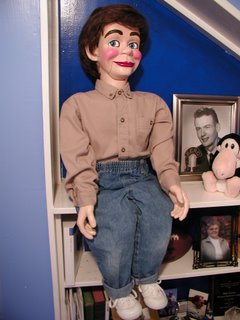 Well, here he is. He still needs a haircut. I'm calling him "Jackie".

My dog Tasha (a REAL dog) just loves the little guy. She comes running upstairs everytime she hears his voice. She looks right at him when he speaks. She doesn't quite know what to make of him, but she sure is intrigued.

Now... if only dogs could laugh.
Posted by Kenny Croes 2 comments 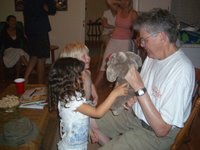 I was persuaded to entertain the children at the beach cottage. Now, you must understand that my wife and I don't have kids. So, we're not around kids that often. I like kids. I just don't know what to expect from kids due solely to unfamiliarity. So when I brought my little pal "Chester" to the cottage, I did my routine for the wee ones. Well, the session slowly deteriorated into the 3 and 4-year-olds grabbing Chester's nose and ears, pulling and tugging and giggling.

I have not experienced a similar reaction from an adult audience.

The parents got a kick outta the whole scene. They laughed, too, but not at the jokes (which all went right over the kids' heads). The parents were laughing at the synchronized kiddy attack of helpless Chester.

In the future, the parents suggested a routine filled with potty, pee-pee and burping jokes for the l'il tikes.

I think I need to read up on that.
Posted by Kenny Croes 2 comments

I've been in Laguna Beach for the past 3 days. No vent building. Only relaxing hours on the deck overlooking historic Crystal Cove. I've been reading some pulp fiction and letting the cool breezes wash over me. I'm with my wife, my brother and his wife and kids and numerous visitors. It's been nice. Today we moved out of the cottage and are back in Newport Beach in my brother's lovely house. We'll stay for July 4th activities and fly home early Wednesday morning.

Perhaps the time off from my vent building will give me new perspective.

Now... back to that novel...
Posted by Kenny Croes 0 comments