I sent this to Clinton Detweiler who writes the blog "Newsy Vents". He was kind enough to post it on his blog. I thought I'd share it with you, too.

"My love of puppets and ventriloquism began when I was just 5 years old. My first puppets were marionettes. But very quickly I became fascinated with Paul Winchell and Jerry Mahoney. On my 6th birthday, my parents gave me a 24" Jerry Mahoney and Paul Winchell's book "Ventriloquism for Fun and Profit". Within weeks, I was performing for kids at school assemblies. Within a few years I was given a Jerry Mahoney with the ball and socket neck, and then a rare Jerry Mahoney with moving eyes. (Boy... do I wish I had that Jerry today!)

In my mid-20's, I partnered up with actor-magician Harry Anderson in a street act in San Francisco. We used ventriloquism to collect money from the crowds. After Harry performed a superb 30-minute magic show (I did the music), Harry would pretend to hypnotize me. I would pretend to fall into a deep, bug-eyed comedic trance. Then I would start to sing a childrens song without moving a muscle. Instead of the crowd moving away from us when it came time to collect our "donations", they would be compelled to move in closer. Harry would stand next to me as I sang and collect the dollars, 5's, 10's and 20's they would drop into our church plate. Without a doubt, we were the best paid street act in San Francisco in the mid-70's.
Today, I perform with Chester, a small soft dog hand puppet. And like Clinton, I build hard vent figures. In fact, I've learned a great deal about the art of ventriloquism and the construction of vent figures from reading the Newsy Vents blog.

Ventriloquism has enriched my life and to see it continue as a practiced and cherished art form in this age of technology is truly a blessing."
Posted by Kenny Croes 0 comments 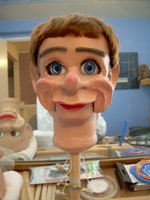 I'm circling third and about to slide into home with Charlie4. I need to touch up his face paint detailing (after a critique from my artist-wife). I also want to make a few adjustments to his wig. 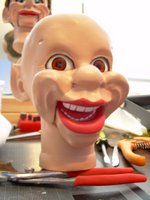 Charlie5's face has been re-sculpted. This will be the first time I've altered the jaw to accomodate large upper front teeth. I had to cut the opening below the jaw so the mouth would open wider. I also added some MagicSculp to the lower corners of the jaw opening to lessesn the distance between the neck and jaw. It worked pretty well.

Soon Charlie4 will be on Ebay and Charlie5 will be nearing third base. Meanwhile, Charlies 6,7,8,9 and 10 are all in the dugout and ready to change identities.
Posted by Kenny Croes 0 comments

Charlie5 is requiring some different approaches to mounting the eyes. While the dual platform approach worked well with Charlie4, I may have to go to brass rods for axle posts secured to the upper head (above the eyeball) and lower platform (below the eyeball). It's because the altered jaw interferes with the screw and nut axles. All this is very clear and interesting, I'm sure. Suffice to say that I work through my innovations (read "frustrations") by blogging. That's why I usually include pictures as often as possible... to make it a little less boring for the reader. (Sorry. No pictures this time)
Posted by Kenny Croes 0 comments 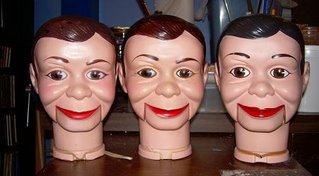 No. They're clones. But they won't be for long. I can't seem to stop the madness!
Posted by Kenny Croes 0 comments

If I had hair, I'd be in curlers 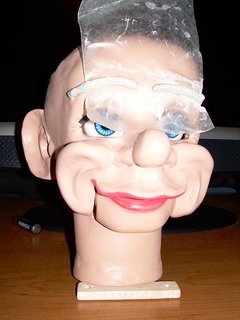 Charlie4 is nearing completion. His mechanics are installed, springs and all. Today I molded his eyebrows onto the brass armiitures. Instead of using fleece material, I decided to go with hard eyebrows molded with MagicSculp. I used a sheet of wax paper to keep the MagicSculp from sticking to the forehead.

I also intend to use a hair wig rather than a fleece wig. I personally like the curly fleece wigs, but I think the buying public prefers the hair. And I'm making Charlie4 for a ventriloquist somewhere in the world.
Posted by Kenny Croes 0 comments

Today I received the Charlie vent figure I bought on Ebay that was rebuilt into a pro-style dummy. I believe it was constructed by a regular Ebay seller, though I did not purchase it from the builder. I was anxious to see the product to compare Charlies.

I learned a few interesting tricks from examining the dummy. His eyes are not round eyeballs, but rather cylinders with painted-on irises. The spring connections on the jaw are in different places than mine. One end of the spring is attached to the lower jaw connection and the other to the interior base of the neck. Also, I saw how the wig was cut to fit. All helpful observations.

The body is larger than the Braylu models I've been using. However, I think the new ones I'll be ordering from Braylu will be larger. I'll measure this dummy and send the measurements to Braylu.

It's great to see someone else's work.
Posted by Kenny Croes 0 comments

Making vent figures can be a grind

While I am quite pleased with the face of Charlie4 (pictured below), Charlie5 still looks weird. So tonight I am pulling out the rotary tool grinder and remaking his upper lip. No pictures, but believe me, he needs it.
Posted by Kenny Croes 0 comments 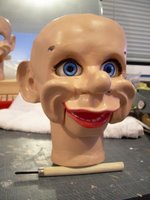 Here's a look at Charlie4. I just installed the eyes. You also may notice he has eyelashes. This is the first guy of mine to have 'em.

Charlie5 just underwent an entire face remodeling. My initial face design turned out rather odd. The new one is better. You'll get a look soon.
Posted by Kenny Croes 0 comments

Over the weekend, I bought three more old Charlies on Ebay. My discussions with Buzz James at Braylu about production of a slightly larger body reinvigorated my vent-building momentum.

I also purchased a used pro-Charlie built by a fellow who also re-builds Charlies and sells them on Ebay. I'm excited about that because I'm curious about his methods. I hope to learn a new trick or two, especially about mechanics. This builder doesn't alter the Charlie faces very much. But he installs moving eyes and repaints the faces. He also does raising eyebrows, but I don't believe the one I bought has them.

Meanwhile, I'm in the head-painting phase of the two Charlies in production. As soon as that's done, installation of mechanics begins.
Posted by Kenny Croes 0 comments

Getting the eyes mounted correctly and evenly has been a real challenge. I've taken great pains (with the emphasis on "pain") to get the eyes well-seated. Today, I discovered an excellent and easy solution.

I cut small individul platforms for each eye. Then, I place a second platform spanning the width of the head interior. I mount it on the plastic upper interior portion of Charlie's original mouth area. Then I place each individual eye platform (with eye attached) on the lower full-span platform. The eyes seat beautifully and evenly. What a cool deal!
Posted by Kenny Croes 0 comments 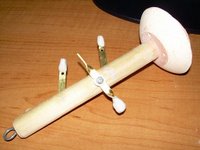 I've successfully built brass levers in the Braylu-manufactured posts. It wasn't too difficult. My only concern is control placement. But gouging the slots, cutting the brass and drilling the appropriate holes was easy. I just need to do a little clean-up sanding and they'll be ready to go.
Posted by Kenny Croes 0 comments

With Charlies 4 and 5, I want to replace the wood dowel levers with brass. Last night, I successfully gouged a slot for a brass lever in the Braylu post without ruining it. The slot was a touch wide, but I think I can remedy that with a little MagicSculp. I also fashioned a brass lever, though I think it may be a little too long. I'm nervous about shortening it because I'm concerned that the radius of the lever might not be wide enough to pull down the jaw. I think I'm fretting over nothing, so I'll probably shorten it by a quarter-inch or so. I used a very short length of brass rod as an axle for the lever. Worked pretty well. I think the brass levers look much more elegant than the wood dowel levers.
Posted by Kenny Croes 63 comments

I have been in discussion with the fine folks at Braylu about a custom-designed body for my Charlie projects. The Body30B, which I currently use, is a little small inside for folks with large hands. Buzz at Braylu told me that he could design and produce a body that has more depth and that might better fit 2T clothing.

Understandably, I'd have to purchase 5 or more at a time to make it a worthwhile project for him. But as I told Buzz, that means I'd have to make 5 more! Oh my gawd!

I am so impressed with the Ventriloquism community. The suppliers and builders with whom I have communicated have all been so helpful and supportive.

Oh yeah... and I got my first Ebay bid for "Poindexter"!
Posted by Kenny Croes 0 comments