Which side am I on? 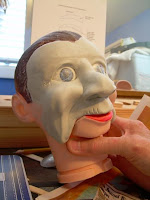 I have scuplted the left side of this guy's face. I had to cut down the jaw more than I ever had to before to fit the jaw opening. I'll be adding Magic-Sculpt to the jaw piece as well. It will get some addtional treatment on the lower sides to match the contours of the jowels. The jaw's pivot points will be higher in the head than the original spot, so I'll extend the jaw's bottom portion to cover the jaw opening in the head. 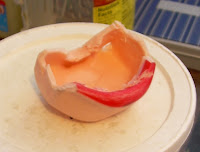 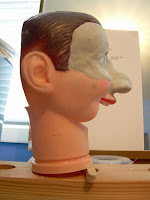 Take a look at the schnoz on this guy. My intention is to make him an old fart. (They say our noses grow as we age. He must be ancient!)

I want to make him ornery looking, too. We'll see how close I get.
Posted by Kenny Croes 0 comments 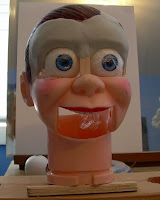 Awhile back I was asked why I saw away the entire eye area rather than just cut out eye sockets. As I mentioned, the larger eyes (1.5" in diameter) usually don't fit that well when the eye sockets are cut into the head. I prefer to sculpt my own eye sockets so the eyes fit and operate properly. Here's a look at the progress of my current project.

I lightly glued the eye tray in the head and sculpted around the upper portion of the eyes. I tried a new technique on a flat surface where I used a round plastic washer about 1.25" in diameter and formed the Magic-Sculpt around the washer to make the eye socket very round-shaped. Then I lifted the Magic-Sculpt off the flat surface away from the washer and applied it to the head. I left some room above the irises because I intend to add an eyelid flap across the eye just above the iris. 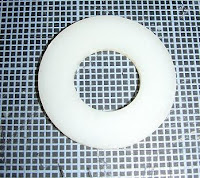 The next step is to sculpt the lower portion of the eye sockets. I'll use the same new technique with the plastic washer to form a nice rounded lower socket. Then comes the nose, cheeks, etc. I intend for this character to be an old-timer. More progress reports to come!
Posted by Kenny Croes 1 comments

A night at the museum

If you've never explored Bob Albano's website, "A Tribute To Ventriloquism", I highly recommend spending some time there. It's like walking through a wonderful museum of ventriloquil relics. You'll see every manner of vent figures, from ancient to modern-day. I was also amazed at the number of local and regional ventriloquists pictured on the website. It makes me feel like... well... like I'm not alone.

I've also streamed many of the videos. Very cool and very educational. Treat yourself to an inspiring tour. Click on "Tribute To Ventriloquism" in my Links section.
Posted by Kenny Croes 2 comments

I dub thee "Trevor". He looks like a "smarty-pants" to me. Hopefully, he'll be trading witty barbs with someone soon. He's on Ebay looking for a partner. 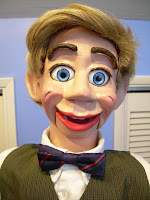 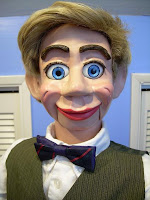 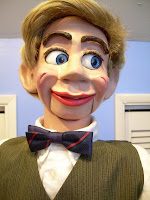 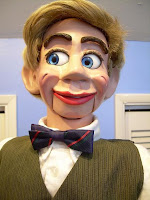 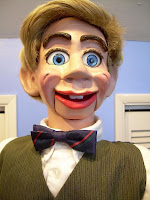 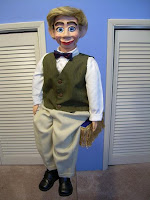 I had to make my first repair on a vent figure I built. Luckliy, the repair had to be made before I sold the little fellow. The jaw cord slipped off the pulley inside the head after the head was sealed and the wig was attached. When I sell the figures, I include a photo of the inside of the head with instructions on how to get inside the head if a do-it-yourself repair is attempted. I finally had to follow my own instructions.

I "permanently" seal the head with dabs of Magic-Sculpt in three places. The seals can be easily sawed through, which I did. Then I had to peel up the wig, which as you know from the previous post, is glued down with Elmers Glue. I peeled up the wig without too much difficulty and no damage. (I left the wig still firmly attached to the trap door, however). Once inside I analyzed the problem. I decided the slippage could be fixed by reducing the play in the lever on the control post. A touch of wood putty in the lever slot tightened the cord. Problem solved.

I've reattached the trap door with three more dabs of Magic-Sculpt and I'll re-glue the wig around the head later tonight. By tomorrow, he'll be ready to rock.

Still, I think my new approach to the trap door on all future figures (as explained in an earlier post) will allow me to use screws to attach the trap door. I'm considering a couple of approaches to accomplish that. More later! (maybe with photos!)
Posted by Kenny Croes 1 comments

Cutting down a wig is pretty hairy

I'd show pictures, but frankly it's a mess. It's never pretty. But here's how I cut down an adult wig to fit my Charlie projects: 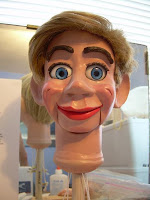 This fellow is almost ready for adoption. I need to touch him up with a few paint dabs, sew the slits in the back of his shirt and jacket, and dress him. Later in the week, he'll make his debut on Ebay. This guy sure taught me a lot. He's been a joy to work on.

I received a couple of questions:

1. Why do you cut out the eyes completely rather then just the eye sockets?

First of all, I use larger eyeballs than the standard Charlie sockets will accommodate. Secondly, even when I cut out larger eye sockets, the 1-1/2" spheres never fit right.

2. Do you buy something to use for the ball of the neck or do you shape it from wood?

Cecil is my name 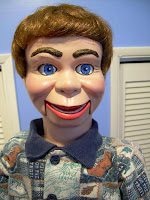 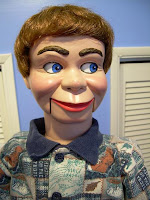 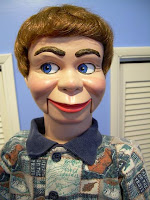 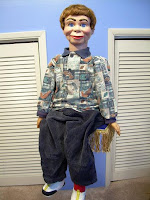 I have dubbed this little fellow "Cecil". Though his name may be changed by his ultimate partner, he looks like a "Cecil" to me. He's now available on Ebay! 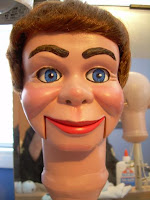 I finished refurbishing the Charlie I bought for the purpose of examination. He proved to be very helpful in furthering my education. The least I could do for him was repaint his face, put his eye mechanics back together, repaint his blue eyes, apply textured eyebrows, reinforce his control post/neck connection, and give him a decent wig.

Tomorrow I'll shop for new clothes for him and prepare him for sale on Ebay.
Posted by Kenny Croes 0 comments

He's quite a cut-up 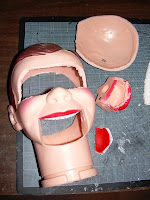 Here's how I start my Charlies.

By the way, if you're into ventriloquism blogs (and if you're reading this, you must be), there's a new one called Smith & Jones". Take a look. The blog was started by "jimmy of kansas city", a ventriloquist who often comments on my blog. His blog has a collection of ventriloquism videos on the page. Fun! 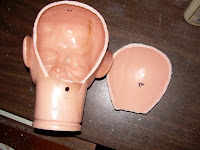 On my prior Charlie projects, I used a rotary cutting tool to open the head. My line of cut was from the top of the forehead, down the back sides, and across the bottom just above the string hole on the back of the neck. My technique made for a much larger opening, but the cut was always irregular and rough. When I put the "trap door" back on, it was secure but not too pretty. (However, it's always covered by the wig).

Awhile back, I purchased a semi-pro Charlie to see what techniques were used to build him. (You may recall that I am refurbishing the little guy). Along with the use of cylinders for eyes as opposed to spheres, the opening in the head was illuminating. It was a straight clean cut only in the back of the head from the top, to just behind the ears, to just above the neck. As I refurbished the fellow, I realized my hands fit inside reasonably well. So my next Charlie-project heads will be opened in the same fashion. I used a hand saw and the cut came out straight and clean, though I was surprised how tough the Charlie composition material is to cut by hand.

Now the real test will be if I can really get my hands inside enough to build the mechanics I use.
Posted by Kenny Croes 0 comments 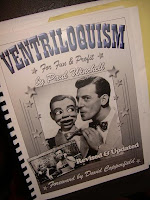 I just bought this copy of Paul Winchell's book "Ventriloquism For Fun & Profit". My first copy was purchased in 1955 shortly after my parents bought me a small Jerry Mahoney doll. I was only six years old, but I read this book from cover to cover. I absorbed and practiced every lesson.

As a youngster, I performed the School Dialogue in the back of the book for several years. I misplaced my original copy when I was still a kid, so it was with great nostalgia that I re-read the old routine.

Thumbing through the text today, I am reminded what a wonderful book this is. I especially enjoyed the new Forward by David Copperfield. Though he eventually became a magician, his early childhood experience with ventriloquism mirrored so many others like mine. I agree, Paul Winchell was a true genius. I'm so glad I bought the book again.
Posted by Kenny Croes 2 comments