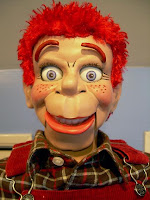 I've finished a new figure. This little monkey is named Sparky. Soon he'll be trading barbs with a winning bidder on Ebay. I suppose the little smartaleck should come with a warning label. "Do Not Attempt To Reason With Sparky".

If you're a Trekkie, you may recall that Velcro was actually introduced to planet Earth by the Vulcan T'pol's ancestor back in the 1950's. I have finally successfully used it to secure the back of a wig on a new figure I'm building. Prior to that, I just glued the wig down. I avoided using Velcro because I had difficulty sewing the stuff to the wig. However, since getting comfortable with hot glue, I've hot glued the Velcro strips to the wig with outstanding results. I even tested it by sealing the head and securing the wig, then pealing back the wig and re-entering the head. Worked great.

I wonder how many other nifty products have been introduced to humankind by aliens? (ShamWow from Vince?)
Posted by Kenny Croes 1 comments

I used to make my living singing and writing songs. But before I wrote my own songs, I learned to sing other people's songs. I sang them in my own way, but someone else composed the material. I learned phrasing, voice inflection, consistency of performance and timing. From the knowledge gained, I eventually wrote and performed my own tunes. It's not exactly the same with jokes, but the spirit of the process isn't that different.

Because most ventriloquists are local or regional performers, there is less chance that the same audience will hear the same joke performed by two different ventriloquists. So borrowing from one another is a safe practice. Especially since we all bend material to fit our character and voice. Most of us seem to build routines from a blend of Boley books, borrowed ideas from other vents or comedians and original ideas. Seems as time goes on, the original material increases and the Boley and borrowed material fades away. This appears to be the natural evolution of routines.

With YouTube, we have the opportunity to see many more vents perform, so exposure to other's ideas is more frequent. I suppose this is a blessing and a curse. The chance someone may see the same or similar jokes performed by more than one ventriloquist increases. Even so, it seems to me that we're all so different in voice, character, and demeanor that borrowing and bending is still a safe practice, especially when just beginning to take up the art. I wouldn't condone or recommend walking on stage with a skeleton figure and performing Jeff Dunham's Dead Terrorist routine word for word. But if you can take a joke or idea from the routine, bend it to fit a character you're working with and get laughs from an audience without them immediately thinking, "hey, that's a Jeff Dunham joke", then I think it's fine.

If a performer's goal is to become a nationally-renowned ventriloquist, then all-original material is mandatory. Even among local guys and gals like me, becoming 100% original is a goal most of us work toward and many of us reach it. But if you're an old guy like me, I ask how many of us performed the routine in Paul Winchell's "Ventriloquism For Fun and Profit" word for word until we figured out a joke or two on our own? (Did I see a bunch of hands go up?)
Posted by Kenny Croes 9 comments

I'm possibly the last ventriloquist to find these, but on the off-chance there's someone else out there who hasn't seen them, I recommend viewing the Ventriloquist Central Collecting Series. Ventriloquist Central impressario Dan Willinger has recorded several short video segments where Dan shares some of the jewels of his figure collection. We get a close-up peek at the McElroy figure controls and mechanics inside the head. (What a marvel of ingenuity). Dan also shows off a couple of Brian Hamilton figures, demonstrates some Les Insull creations, shares some Frank Marshall figures, and even explains the Frank Marshall painting method.

I'd love to see more. I hope Dan adds more episodes in the near future.
Posted by Kenny Croes 0 comments

Audiences don't know a stock figure from a custom figure. They are ALL custom characters to them. They don't spend hours exploring ventriloquist blogs and websites familiarizing themselves with the various "stock" figures and puppets on the market like we ventriloquists do.

The only thing that matters to an audience is entertainment. It doesn't matter whether Jim Barber is making them laugh with his bare hand or Terry Fator is amazing them with a soft puppet anyone could buy from Axtell Expressions or Jeff Dunham is killin' em with his unique Achmed the Dead Terrorist. The folks are havin' a real good time.

In churches, schools, at birthday parties, on cruise ships and in local bars, thousands of ventriloquists are making millions laugh. And they're using corny old routines, witty original dialogue, stock and unique figures, and some even move their lips. And guess what.

The folks are havin' a real good time. To me that's what really matters.
Posted by Kenny Croes 4 comments

A reader of this blog emailed a question about the substance I use to create the new faces on the old Charlies. I was also asked if an entire head can be made from the material. Here's my reply:

"I use Magic-Sculp. It's a two part compound, an epoxy and hardener, both with a clay-like texture. The two parts are kneaded together for 2 minutes. (ed: Wear latex or vinyl gloves. While non-toxic, it can be irritating to skin). It hardens at air temperature overnight. It can be sanded, drilled and sawed. It's non-toxic and easy to work with. It can be purchased online at art supply or taxidermy supply stores.

An entire head can be made with it if it's reinforced between two thin layers with sheets of gauze or fiberglass tape (which is used in drywall taping). The reinforcement should be pressed in while the first layer is still slightly soft. Without the reinforcement, a Magic-Sculp head could shatter. The reinforcement acts like rebar in concrete. Some vent builders use a mannequin head wrapped in aluminum foil as an armature. Magic-Sculp doesn't stick to the foil, though a layer of Vaseline or Mold Release would ensure a clean release. (It will stick to the mannequin).

The Magic-Sculp can be smoothed with water while sculpting. You only have about 20 minutes of working time before the Magic-Sculpt begins to be less manageable, so it's important to know what your goal is.

Some builders sculpt an entire character head from Kleen-Klay on an armature, then press 1-inch pancakes of Magic Sculp over the clay sculpture. A mold release or talcum powder should be applied to the clay sculpture so the Magic-Sculp will release.

The best source for these techniques is Mike Brose's book "Figure Making Can be Fun". It's available on his website www.puppetsandprops.com. Well worth the investment. Plus it covers animation mechanics, body building (ed: The figure's, not mine), painting, mold making, and more.

I should also state that I've never made an entire head from Magic-Sculp. As you may know from my blog, I apply Magic-Sculp to toy Charlie McCarthy heads to make my characters (called Conversion Figures). Two builders that do make entire heads from Magic-Sculp are Steve Barry of Gepetto's Workshop and Robert McRay who is famous for his "Big Head" creations. Both might be sources for further advice on the subject. You'll find links to their websites on my blog."

For the record, there is another similar product on the market named Apoxy-Sculpt. Some folks prefer it over Magic-Sculp. But like a preference for Coke or Pepsi, I'm a Magic-Sculp guy.

One of the first to contact me through this blog was Jimmy Smith, a ventriloquist from Kansas City. At the time, he performed with an aging sidekick named "Harry". Awhile back, Jimmy set aside his ventriloquism career to become a bass player in a band. He even sold his partner "Harry" assuming he would never return to conversing with make-believe people.

Well... the ventriloquism bug bit him again. Big time. So he purchased another "Harry", this time a younger version of his former chum. Now Jimmy and Harry (billed as "Smith & Jones") are tickling funny bones again.

Meet "Smith & Jones" on their My Space page.
Posted by Kenny Croes 1 comments

As I wander through the forums and blogs seeking advice on ventriloquism and vent figure building, I serendipitously discover other forums and blogs. Such was the case today. Actually, this series of new-found resources was initiated by an email I received. From there I wandered further. So let me call your attention to three new blogs and one new-to-me ventriloquist website:

I put some teeth in it 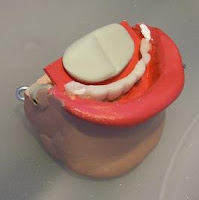 Here's a shot of a jaw I'm making for a conversion figure. I've put teeth in the upper part of the mouth before, but this time I'm adding teeth to the lower jaw. (I also put tongues in my figures now). The teeth are plastic Dracula teeth that I've trimmed. I secure them with Gorilla Glue, a substance I've only recently discovered. Besides the fact Gorilla Glue works great, it has a sparkly quality that resembles saliva when it dries. A little touch-up here and there, some pink paint on the tongue and the jaw will be ready to install.

I hope to swtich to a PVC pipe headstick. I applied controls and levers (of sorts) to a PVC pipe headstick prototype. It turned out looking like a device one might use to restrain Hannibal Lector. I'd show you a picture if it wasn't so embarrassing. But I've since received some good advice from Buzz James of Braylu Creations. There are gizmos and techniques I didn't previously know about that will make a more elegant-looking (and smoother operating) PVC headstick.