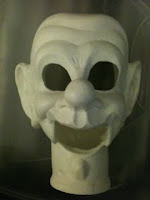 My friend Buzz is always encouraging me to alter my cast heads to create new characters.  You know... make slight alterations by changing the shape of a nose, or making the cheeks bigger and rounder, or... making the eye sockets much bigger so they will accommodate 1.5-inch eyeballs instead of the smaller 1.25-inch eyeballs I typically use.

So that's what I've done to the "Elmore" head in the photo. Who knows.  I may do something even more radical.  (Eeeeeasy, Kenny).
Posted by Kenny Croes 0 comments

Saint Nick will soon be there 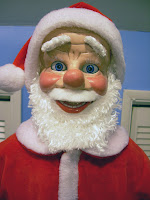 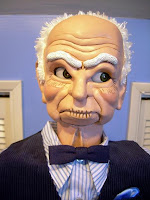 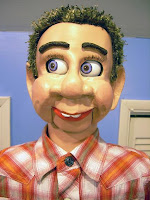 These little fellas are headed in very different directions. Mr. Winkle (l) is about to embark on a long journey to his new home in wintry Norway. Donnie (r) is going south to The OC (Orange County, California) where the weather is almost always sunny and warm.

I think their respective dispositions are well-suited to their destinations. 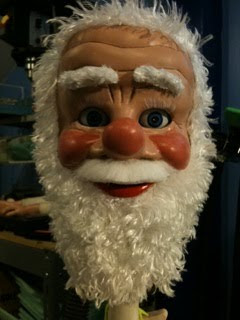 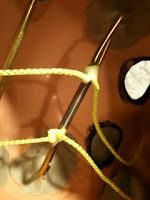 What you're looking at is the inside of a figure's head.  The cords are attached to the eyebrow-raising mechanics.  I tie some kind of double knot (I never earned my Boy Scout knot tieing badge, so I don't know the name of the knot).  To make sure the knot never comes untied, I douse the knot with Elmer's Glue.  The glue dries to create a hard protective shell around the knot.
Posted by Kenny Croes 0 comments 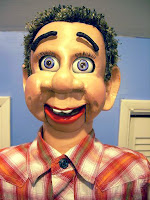 This li'l cowpoke (now fully-dressed) is hankerin' for a homestead.
He's a-settin' on a fence post on Ebay.
Posted by Kenny Croes 0 comments 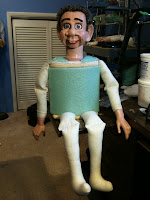 My Cheeky Boy character (now with buck teeth) is about ready to make his debut on Ebay.  But I haven't chosen his wardrobe yet.  So until I do, he's in his "altogether".  He looks a little surprised I pointed the camera at him.
Posted by Kenny Croes 0 comments 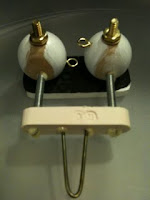 The eye hooks on the side of the eyeballs are for attaching cords, which will be attached to a lever, which will cross the eyes when pressed down.
Posted by Kenny Croes 2 comments 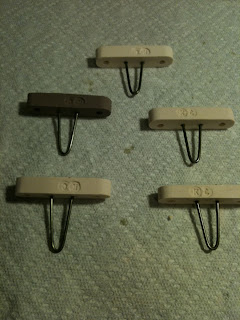 My dry cleaner is one of my suppliers.  What does he supply?  Coat hangers and plastic bags.

I use the coat hangers to make the loops in my eye synchronizers.  Rather than use expensive brass, I cut the coat hangers in 3-inch lengths, mark the center, and bend them around a metal punch secured in a vise.  Then I dip the ends in water, apply some Gorilla Glue, and insert them in the pre-drilled holes in the plastic synchronizers (which are custom-made for me by Braylu Creations).

The plastic bags? When I collect my dry cleaning, the shirts are draped in clear plastic.  I save the plastic bags and re-use them to cover my figures for shipping.
Posted by Kenny Croes 0 comments 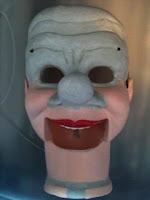 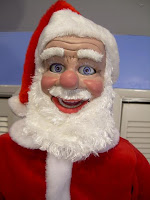 ﻿﻿﻿﻿﻿﻿I'm building another Santa Claus figure for a client. He admired the Santa I built and sold last year and special ordered a St. Nick for himself. So I had to check my archives to see how the heck I made it. Fortunately I take lots of photos and even a video of every figure I make.﻿

Santa is a conversion figure made from a Charlie McCarthy vent doll. I apply Magic-Sculpt to the forhead, eye sockets and nose to create a new face. Unlike working with molds and castings, I have to visually try to duplicate what I did last time.

We'll see how close I come.

Dickens... takin' a nap a few years back.
Dickens Croes, our 18-year-old Tabby cat passed away in the night.  He had been fading away over the past month, so it was no surprise.  Mercifully he lost the ability to walk only on his final day on the planet.  As Dickens’ health declined steeply in the past month, it seems he didn’t understand why he wasn’t able to do the things he was used to doing.  It’s difficult not being able to tell him why.  I wanted to tell him we are all made from the same elements as the stars, and eventually we are all reclaimed by the stars.  So we carried him upstairs to our bedroom last night, placed him on a large comfy pet pillow, and there he quietly went to sleep forever.
He came to us in 1992. He was born the runt of a litter at a neighbor’s house.  He had been neglected. He was weak and covered with fleas.  He was only a few weeks old and so small we could hold him in the palm of our hand.  Joyce rescued him one night very late.  She carefully bathed and combed the shivering little creature.  She placed him in a box with a soft warm blanket in an empty back room.  I still remember the next morning when Dickens shakily emerged, walking toward me down the hall, meowing his adenoidal purr (which he never lost). It’s amazing he survived the first night.
Dickens loved to have his head petted (though he drooled copiously while we did it).  He begged like a dog when we cooked.   He once swallowed a needle and thread, resulting in midnight emergency surgery at a vet hospital. Dickens was a timid and clumsy jumper.  But still he had the moxie of his father, a big tough Tabby that used to perch on our back fence.  Our Dickens had many of the annoying habits and instincts cats possess.  We loved him for it.
When Dickens joined our household, we lived with a 60-lb. black lab named Sam.  Sam had been cornered and clawed by a cat in his earlier days. Sam was at first deathly afraid of Dickens, even though Dickens was the size of tea cup.  But as Sam and Dickens grew up together, they became best pals.  Sam and Dickens would roam the cul-de-sac side by side.  Dickens would feel particularly tough since he had a big black lab as a protector.  They would wrestle and tumble.  Dickens would attack Sam’s haunches like he was a lion bringing down an elephant.  When Sam finally passed away 12 years ago, Dickens lost his favorite buddy.
Dickens will always be in my heart.  His presence was a part of my day every day for the past 18 years.  I’m going to miss the little fellow.
Now he's back with Sam, roaming the stars.
Posted by Kenny Croes 4 comments 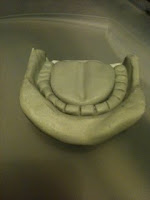 I just finished the interior of the jaw for the full-size head I'm building.  I did the teeth and tongue today.  I'm inching ever closer to completing the big fella.  The next major sculpting task will be the ears... always a fun challenge.
Posted by Kenny Croes 1 comments