You've probably met this guy before, too. It's not the same guy, but every town seems to have a few of 'em. It's the guy (or gal) who works at the local home improvement store that goes out of his way to make you, the customer, feel stupid. This guy answers every question with another question designed to make you feel inferior for even asking the question. Before he's gonna help you, he'll make sure you know he's smarter, more experienced, and superior in every way to you. When he finally does answer a question, he'll be intentionally cryptic. He'll throw in a few technical terms for the pleasure of seeing you wrinkle your brow in confusion. He'll turn away and pretend to go back to whatever he was doing before you bothered him so that you have to get his attention again to make further inquiries. Then he'll turn back to you with this look of "What? You're so dense that my answer didn't sufficiently enlighten you, you idiot?"

And then, this is the part that really pisses me off. The guy suddenly turns very friendly and polite so that any inclination you might have had to tell him off would make you seem to be the unreasonable one.

It's not like I was asking for instructions on how to assemble a ten-story building. I just wanted to know about paint primer, for gawds sake!
Posted by Kenny Croes 0 comments

"The World Is A Stage", the blog by ventriloquist Jay Johnson, is my favorite blog. As you might guess, Mr. Johnson has a very creative mind. He's funny, a little twisted now and then, and very often makes fun of himself. I also enjoy his tales of life as a professional entertainer and ventriloquist. There was a time in my youth when I aspired to do what he does. (In fact, I even auditioned for the role he won in "Soap"). So hearing about his adventures, his travels, his friends and associates is very entertaining and quite amusing. His long blog entries, often hilarious diatribes, show what an active mind he possesses. Jay Johnson is one of our great living-legend ventriloquists. He's also a terrific blogger.
Posted by Kenny Croes 1 comments 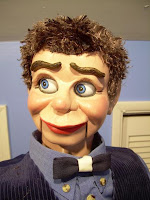 This little funnyman hopes to find someone to be his "straightman". Take a gander on Ebay.
Posted by Kenny Croes 0 comments

You must be joking

If there was sound, I suppose this miniature comedian would be making you laugh. Hopefully soon, someone will give him a voice of his very own.

I was asked recently why I prefer Elmer's Glue to other glues to attach wigs. I replied that I use Elmer's because it's easy to apply, holds firmly, but can be unattached if necessary without ruining the wig.

The person asking the question was also wondering why I don't use hot glue. The reason I don't is self-preservation. I always burn the crap out of my fingers every time I've used it.

I also don't like the Velcro solution because the stickum on the underside of the Velcro doesn't seem very secure on the wig. I find it difficult to sew the Velcro onto the wig, too. So... it's glue.

My question to you... is there another better glue (or solution) to consider?
Posted by Kenny Croes 0 comments

I've drifted a little too far to the other side

Today I was dressing my latest vent figure. He's a redhead. I bought some really cute red jeans for him. I also found a nice red plaid shirt to go with it. As I'm putting on his shirt, I noticed that it was made of a thick flannel. The first thought that popped into my head was "It's August. I think he'll be too hot in this flannel shirt".

Every mistake leads to a discovery. Every discovery sooner or later leads to another mistake. And so the world goes 'round. This entry concerns a minor mistake... no... not a mistake... but rather a less-than-perfect choice. Here's the the recommendation:

If you're making vent figures that use cords (as opposed to them fancy figures with machined, welded and soldered gizmos), choose the yellow nylon cord, not the white. Now, white works fine. But the yellow cord is a bit stiffer and easier to work with.

Yeah, I know this helpful hint does not represent an entire paradigm shift in dummy making. But hey, I wish someone had told me before I bought 500 yards of the white stuff.
Posted by Kenny Croes 0 comments

My mother's 80th birthday is this weekend. My brother, sister and step-dad are flying in from various parts of the country for a family celebration. So I'm working under a deadline to finish at least one of the two vent figures I have under construction. They've seen photos and videos of my little guys, but never in person (so to speak). I figure this is good training for finishing up a made-to-order figure on time. I'm pretty sure I'll make the Friday deadline.
Posted by Kenny Croes 0 comments

No, I love summer because my Magic-Sculpt dries in only a couple of hours. Is that sick or what?
Posted by Kenny Croes 0 comments 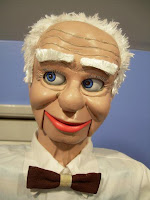 "Uncle Ferd" is now a subject of the Queen. He's found himself a happy home in the loveliest of country settings in England.

Update: His new partner has told me that Uncle Ferd will join him on a pleasure cruise around the Mediteranean. Now that's living!
Posted by Kenny Croes 0 comments

May I take your order?

What the heck. I thought I'd avoid taking orders for vent figures, but here I go anyway. I've received so many inquiries about it. So I've created an online store at kennycroes.com. I'm offering 4 basic conversion figures. I may add more as I add more "looks". Plus I'm hellbent on adding blinkers to one of these little guys.

So if you've thought about buying one of my little fellas (or if you haven't won one of my Ebay auctions), here's an opportunity to get your very own Kenny Croes vent figure.
Posted by Kenny Croes 0 comments

I've been running tired this week. I have a real job, plus I'm president of the Chamber of Commerce. This week I'm in the midst of preparing annual budgets for 2009 for my job. I've also had two Rotary Club commitments (I'm on the Board) and three Chamber of Commerce commitments. One was to preside over a Chamber board meeting and another was to give a short speech at a city council meeting. Through it all, I'm still getting a few tasks completed on a couple of figures.

That's why my blog entries have been fewer and farther between. But I am moving forward with two more little guys. Each has a new twist to make their look slightly different and unique. I'll share a photo or two when they get farther along.

I also need to begin work on producing more eyes. Another task on my list is to inventory my parts and materials so I can place a sensible order at Braylu Creations and a few other suppliers. I'm trying to be a bit more business-like about this vent-building thing.
Posted by Kenny Croes 0 comments