Today I spent a couple of hours doing what I call my "industrial dummying". It's among the messiest and least fun tasks in my dummy-makin' process. Essentially, I rip apart the Charlie heads to make armatures. It involves sawing off the back of the head, poking out and grinding the eye sockets, pulling out the jaw and trimming it up, and drilling indentations in the interior so the Magic-Sculpt mountings will remain secure. I've done six at a time so I can start turning the heads into characters.

My Dremel tool gets a real workout.
Posted by Kenny Croes 0 comments

Ready to be riled up

"Mr. Winkle" is finally ready to raise a little cane. Soon he'll offer his pessimistic opinions to the highest bidder on Ebay.

You are my sunshine 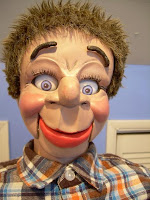 This little goofball "Wesley" is headed for his new abode in sunny Florida. I hope he makes the Sunshine State's audiences giggle uncontrollably as they sip their cool beverages under the swaying palms. 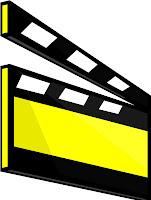 Today I'll prepare my newest "Mr. Winkle" for his Ebay auction. I'll choose his clothes and dress him. I need to do a minor repair on his curly fleece wig. Then he goes in for his photo sessions.

I use a Nikon digital camera on a tripod so I can shoot without a flash. That way his color is captured more richly. I also prefer to use a timer so the camera doesn't shake when the photo is snapped. Besides having photos of him for the auction, I also get detailed photos of him for archiving.

After the still photo shoot, I set up a Canon FS10 video camera on the tripod and shoot a couple minutes of me operating the little fella (me off camera). Though audio gets recorded, I don't use it because I like to leave the voice of the character to the imagination of the potential buyer. I edit video for a living, so I'm able to import the video into my computer and produce a final video presentation with a few graphics and simple effects.

I actually enjoy preparation of the visual presentations as much as building the figures.
Posted by Kenny Croes 0 comments

I have never been to a VentHaven convention. I'd like to go one year. It's a long way from where I live, but it would be fun to meet so many of the ventriloquists, vent figure builders and fans in person that make this great art form prosper.

Like last year, Dan Willinger and Steve Hurst work together to bring us a virtual VentHaven convention experience. Go to Ventriloquist Central to play the audio and video clips of convention activities.
Posted by Kenny Croes 2 comments

This funny-lookin' guy is now officially looking for someone who'll play the straightman (or woman) while he gets all the laughs. Find out more of his story by visiting his Ebay auction.

They break a leg one leg at a time 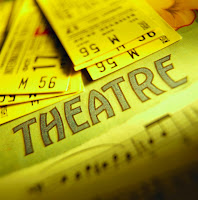 I watched a wonderful documentary titled "Show Business: The Road To Broadway". It's a behind-the-scenes look at the launching of four Broadway musicals; Wicked, Avenue Q, Caroline Or Change, and Taboo.

Though the film showed only isolated scenes of each musical, Avenue Q was my favorite (which features Muppet-like characters-big surprise). Two things about the documentary made the deepest impression on me.

First, there were several scenes showing New York Broadway critics having dinner together and discussing (often ripping) the four shows. I was surprised they socialize frequently. (And my gawd they can be cruel in their comments).

Secondly, I was amazed at how similar the backstage activity and dynamics are to community theatre productions of stage shows. Of course there's a difference in talent and production complexity, but I easily recognized the anxiety, frustration and joy.

Show Business: The Road To Broadway is fun to watch and probably available at your local video store.
Posted by Kenny Croes 0 comments 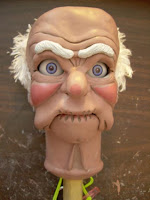 My most popular character to date has been Mr. Winkle. I recently shared with you the steps I take transforming a toy Charlie McCarthy head (my armature) to a completed Mr. Winkle. Here's a composite of all the steps.
Posted by Kenny Croes 1 comments

If you've read the ventriloquist forums in the last few days, you may be aware that the late great Paul Winchell's website has been taken down. It's been replaced with links for buying ventriloquism-related merchandise. I checked with GoDaddy.com to see if paulwinchell.com was indeed taken and it is. It lists the creation date as July 2, 1997 and curiously, the expiration date as July 2, 2009. In addition, it gave the name of the company that owns the URL, the address and contact information, which I'll pass along to anyone that asks.

However, it's too bad the original Paul Winchell site has been removed. It really was a nice tribute to a great man.
Posted by Kenny Croes 0 comments

At last I found you 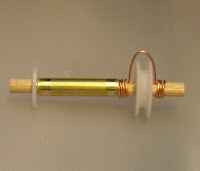 I've toiled over how to construct the best pulley system for the crossed-eyes cord to pass over. I've tried a plastic spacer, plastic spacers glued to plastic washers to make a spool (didn't hold), a second screen door pulley (like the one on the right for the jaw) and so on. The best I've found is a brass tube over the wood dowel. It's quiet and smooth. I still use a plastic washer to keep the brass tube away from the Magic-Sculpt, which I will use to secure the jaw-and-crossed-eyes pulley system.
Posted by Kenny Croes 0 comments

I always appreciate tips from "Vent Into The Mic" blog readers. Here's a nifty trick for accurately and consistently marking a wood eyeball for drilling the hole that accommodates the self-centering spring. (I use wood ball knobs, round with one flat side.)

I found a pair of wire rims that fit okay. The glasses do add the right touch, but I wish I could find an even smaller pair. 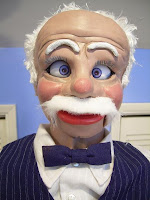 I think Mr. Farley needs a pair of wire frame glasses to complete his "look" (no pun intended). Small child frames are difficult to find, but I'll rummage through the used glasses bins at some thrift stores and "see" what I can find. (There I go with the puns again ).
Posted by Kenny Croes 1 comments