It's a good thing I'm not working under a deadline. I still have not mastered the technique or colorations of facial highlights. I have another idea for an approach, but I don't know whether it'll work. I DO know that I don't have it down yet.

Meanwhile, I'm warmin' up the dremel tool's sanding apparati (plural of apparatus?) to further smooth the two Charlie's faces. They're still too lumpy.

My Brose figure is beginning to talk, so I'd better start writing a routine. He still needs a haircut. And my Gawd he weighs a lot!
Posted by Kenny Croes 0 comments

The most difficult part of painting a figure for me is doing the highlights. The red in the cheeks, the shadows around the eyes, etc. My wife painted the cheeks on my Brose figure. I just attempted to do the same on Charlie 1. It took eight or ten tries, but Ithink I got it. However, because I'm red-green color blind (slightly), my shades may be off. But I have to learn to do it myself. My old buddies "Trial" and "Error" are with me.

Haircut and clothes make the dummy

I'm very nearly finished with my Brose figure. I need to purchase clothes (a suit and tie, I think) and get him a haircut.

I've been sitting him on my knee and looking him over. He just stares back, looks around and doesn't say much yet. I've decided to name him "Jackie" after my old Jerry Mahoney I had as a kid.

Perhaps I'm exaggerating a little. My life was never really in danger when I stabbed myself with the Exacto knife. It just seeeeeeemed that way for a few minutes. But I purchased the Dremel tool and what a difference! It cuts quickly. It smooths quickly. It sands in tight places quickly. I have had a tool epiphany! (Is that legal?)

I cut eye sockets in Charlie 2 and it went very well indeed.

Now, for the latest on the Brose figure. Rather than bolting on the back of the head, I used Velcro straps to secure it. That worked pretty well. I also put the wig on (thanks Goodwill... photos to follow). He looks great. I need to do the Velcro thing to secure the wig to the head and get him a haircut, but even with the longer hair, he looks great.

Well, I've kidded that I'm not alllowed power tools. Now I'm not allowed Exacto knives. Y'see, I stabbed myself in the right hand with one yesterday and had to be taken to the emergency room. What a mess. Now my right hand is bandaged and I'm semi-useless. Fortunately I'm mostly left handed. It feels better today.

I've decided to allow myself one power tool (actually two... I do use a drill). I'm going to purchase a Dremel tool for cutting, polishing, sanding etc. I think I may be able to handle that without severing a digit... at least I hope so.

For now... no guitar-playing for a week or so.
Posted by Kenny Croes 0 comments 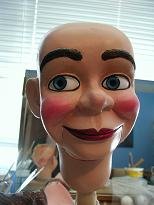 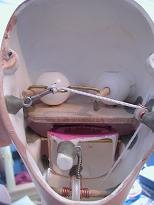 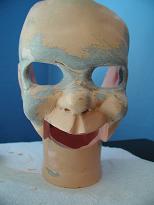 I'm very happy with the progress of my Brose figure. The eyes installed very nicely. They work smoothly and easily. As you can see from the photo, the eye mechanics are fashioned after the old Jerry Mahoney figures with moving eyes. The eyes default to the right with a spring. I pull the nylon string with my index finger (inserted into a small brass ring) and the eyes move to the left. My method is unconventional, but I like it that way. As Mike Brose said when I asked him about my design, "The only rule is... there are no rules!". Thanks, Mike.

And then there's "Chucky". He's caused all sorts of problems. I have managed to salvage him after each disaster, but now he's looking rather sinister. He'll turn out to be somebody... but will anyone want to be around him?
Posted by Kenny Croes 1 comments

He needs to be "unstuffed" a bit. He's SO stuffed he's difficult to maneuver. But he'll be a fun addition to my growing puppet world.

Meanwhile, back in the workshop, I've reconstructed the eye mechanics for my Brose figure. The new design works much better. I am building the eye mechanics similar to the old Jerry Mahoney with moving eyes. They default right. I pull a string and they move left. I actually prefer strings with hoops rather than levers. It's hard to teach an old dog new tricks.

Even when he has a new dog.
Posted by Kenny Croes 0 comments

I went after my Charlie 1 (as apposed to Charlie 2) with some rough sandpaper. I think I salvaged him (and learned something new). I think he's ready for painting. Hopefully he'll look pretty good.

I received Charlie 1 and Charlie 2 wigs from a doll parts place today. The wigs look good, though I'll need to give 'em both haircuts. (Lots of room to screw up there!)

I put the jaw in my Brose figure today. I had a sticking problem due to some paint on the opening that meets the underside of the jaw. A little filing took care of that, though I filed the sides first thinking that was the hang up. I messed that up a bit, but it's a subtle error. I decided not to "repair' the over-filing on the sides of the jaw opening for fear I'd make it look worse. Better to leave well enough alone.

My momentum has returned.
Posted by Kenny Croes 0 comments

Bummer. I think I've ruined my first Charlie. The ApoxySculpt is lumpy and ugly. I've tried sanding it smooth, but as one area is smoothed, another area takes on a lumpy look. I think it's too late to salvage him. But I learned some valueable lessons. I have a second Charlie to work on. I'll purchase another one soon. Meanwhile, I'll get some advice on how to work with ApoxySculpt so that the result is a smooth complexion.

My Brose figure is moving forward. I drilled holes on the control stick and glued it in the head. Next comes the installation of the jaw and eyes. I'll probably glue the eye mechanics into the head to make sure it functions smoothly. If it doesn't, I can remove it and fix it before ApoxyScupting it in permanently.

I was discouraged yesterday about my Charlie, but I think I've recovered today.

The ApoxySculpt madness continues. You see the photo just below this blog entry? Well, now the ApoxySculpt goes all the way up his forehead and over the hairline. (He looks a little frightening). And now his probiscus is even bigger. I had a little ball of ApoxySculpt left over, so I stuck it on his nose.

Waste not, want not.
Posted by Kenny Croes 4 comments 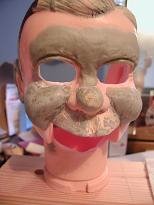 Well, I've gone ApoxySculpt mad! This is more fun than I anticipated. Now I've puffed out my Charlie's cheeks and made his ears a little bigger. I have no idea what he's really gonna look like when all is said and done. But it's sure fun messing with his head (so to speak).
Posted by Kenny Croes 4 comments

I've been ApoxySculpting my Charlie's face to further change his appearance. I added a more pronounced rosebud upper lip feature and a slightly off-kilter and fatter lower lip ala Selberg.

Meanwhile, the Brose head is nearing completion (paint, that is). I relined the eye sockets and added a second coat to the eyebrows. I'm considering painting another coat to the lips and perhaps using a bit more red.

After a drying period, I plan to install eye and jaw mechanics.

The second Charlie I purchased arrived the other day. I'll start working on him this weekend.
Posted by Kenny Croes 5 comments