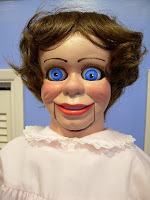 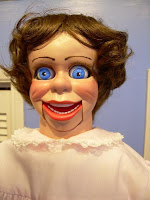 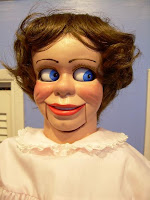 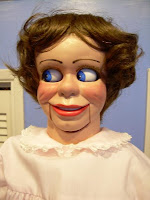 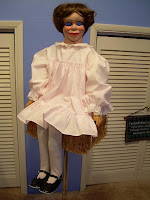 I've finished my first "semi"-pro" style vent figure. She's made from a Danny O'Day I purchased on Ebay. The original puppet was in very bad shape. I cleaned it up, repainted, installed brass mechanics, steel springs and made the eyes myself (first time for that).

She has a ball-and-socket neck for 360-degree head turns, moving mouth and side-to-side self-centering eyes. Her fingernails are even painted pink. She'll go up for auction on Ebay in two weeks.

I think she turned out kinda cute!
Posted by Kenny Croes 0 comments

Hi Kenny,
You might want to consider using wood balls of the same diameter wrapped in Saran Wrap to completely eliminate anything from happening to the good eyes. They are available from "Michael's" and similar craft stores.

Here in KC, the city council is trying to ban street performers, classifying them along with homeless people asking for money on street corners. It's pretty sad they can't see the difference. I've never done street performance myself (my vent act is done mainly for senior citizens), it looks like it could be fun. Maybe I should try it one day before it's a "crime".
9:21 PM
Posted by Kenny Croes 0 comments 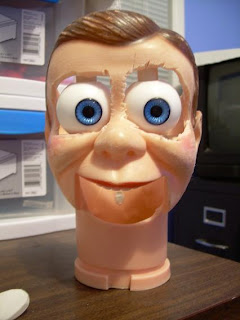 For the first time I'm going to mount the eyes on a stable platform and sculpt around the eyes.
On previous figures, I've mounted the eyes late in the game after sculpting the new face and had to cajole, adjust, manhandle and persuade the eyes to finally operate smoothly. This time, I'm starting with fluid eyes mounted properly. I'll wrap the eyeballs in saran wrap to protect them. If I wreck them, I'll consider this pair my "working" pair and replace them at the right time.
I'm sure I'll run into some new wrinkles, but that's part of what makes this fun.
Posted by Kenny Croes 1 comments

What a cool act! I never saw a street ventriloquist act... I did see the 'Saw Lady' who was in the movie 'Dummy' (with Adrien Brody, about a ventriloquist) in the NYC subway ( http://www.SawLady.com )and I thought that was a cool street act. But I sure wish I could have seen you...
1:39 PM
Posted by Kenny Croes 1 comments 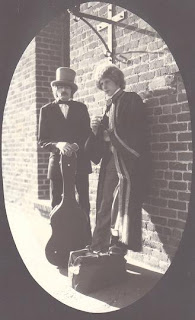 Back in 1974-75, I was a street performer in San Francisco. I moved there from Ashland, Oregon where I had met a talented young magician named Harry Anderson. At Harry's urging, we packed up our props and moved to "Babylon by the Bay" to find our fortune.

We actually worked on a stage inside The Cannery courtyard, a large brick shopping attraction at Fisherman's Wharf. (That's me and Harry outside the Cannery in the photo). Each day, Harry performed three or four 30-minute magic shows to my guitar accompaniment.

Of all the street acts in San Francisco, Harry and I were able to extract more money from a crowd than any other performers of the time. And we did it with ventriloquism.

Now let me state for the record, Harry's magic show was terrific. It was mysterious, fun and hilarious. We'd start the show with maybe 4 or 5 spectators and finish the show with 200 people gathered around that small courtyard stage. As any street performer will tell you, the real trick is getting the folks to pay up before they get away at the end of the show.

Here's how we did it.

I would stand center stage while Harry stood next to me. He would do a long, blusterous introduction of me while I stood there straight and tall. He would pretend to hypnotize me and I would "fall into a deep, dark state of boogie-boogie". My eyes would bug out and I would stand absolutely still. And then the singing would start. And I STILL wouldn't move a muscle.

Harry would hold his hand behind my neck and pretend to be a bad ventriloquist. The folks would laugh. But then he would start speaking over my singing. And then they would realize that I was the one singing. Instead of the crowd moving away, one-by-one they would move closer and closer. As they got to the front of the stage, Harry would hold out the large brass church plate we used to collect money, and each and every audience member would feel obliged to drop a dollar, five, ten or twenty into the money pile.

We may have looked like street urchins, but we usually dined at very nice San Francisco restaurants.

Harry later went on to star in the NBC comedy "Night Court" and later "Dave's World" on CBS. And you know where I've ended up. 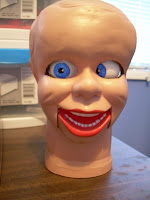 No, I'm not making a screwy-eyed animation. The eye was rubbing against the eye socket and scraping off some white paint. So I took a swack at the eye socket with a wood carving tool and created a skosh more room. Then I touched up the eyeball with some more white paint.

I am not switching my focus to semi-pro dolls. It's just that I bought this Danny O'Day head with the intention of using it as an armature. But the head is small, so I decided to pair it with a small Braylu body, clean up and repaint the head (it was in very poor shape) and use one of the small Monique girl wigs I have on hand. I think it will make a very nice figure for a youngster or someone with smaller hands. Only the mouth and eyes will move.
The two figures I sold and shipped to Europe finally made their final destinations. Both buyers expressed delight in their new little friends, "Professor Jeebers" and "Dudley".
Posted by Kenny Croes 0 comments 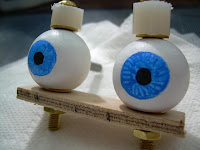 It's rather difficult holding my hand steady enough as I attempt to paint my first eyes. I'm making a very small Danny O'Day head into a semi-pro girl character, and I decided to craft my own eyes out of wooden balls I bought at Wal-Mart. They're not as elegant as those gorgeous Mike Brose eyes, but I thought it might be fun making my own pair of peepers.

I think they'll work fine for this figure.

I've seen the previews of "Dead Silence", and it looks really bad. It will probably be in theaters in a few days, then quickly to DVD. But have you all noticed how ventriloquism's popularity seems to be in an upswing right now? I give Dave Letterman credit for that. I hope he does Vent Week #3 soon!
5:31 PM
Posted by Kenny Croes 0 comments 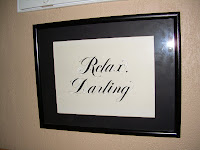 My wife has this framed caligraphy project she did several years ago on her home office wall with the words "Relax, Darling".

I am calmer now that I have counseled with the local postal clerk about how worldwide shipping is conducted. FYI, Global Express Mail only guarantees that your package will be delivered (within 3-5 days) to the country's doorstep. After that, the foreign nation's customs process and mail delivery system takes over. That could mean your shipped item may actually take weeks to arrive at its final destination.

Not only was I concerned that the package might not get there, but I marked the option "Return to Sender" if the package was undeliverable. I was worried that I might have to pay return postage due, which could mean a $60 bill. However, when one sends a package Global Express (or Priority) Mail, BOTH send and return fees are covered.
Phew!
By the way, ventriloquism is about to suffer another "Chucky"-style assault with the new movie "Dead Silence". It seems the premise is a scary ventriloquist dies and is buried with her vent figure collection. And then they all come to life to scare the be-jeezus out of everybody.
I think I'll wait for the rental since I tend to scream out loud at horror films.
Posted by Kenny Croes 1 comments

Just as I was thinking my Belgium buyer liked "Professor Jeebers" so much that he decided to bid on "Dudley" too, he emails me that he hasn't received the Professor yet. It's my fist "Worldwide" delivery attempt, so I immediately launched into a PANIC!

First, I couldn't locate the receipts and paperwork from the post office. I sent it Global Express Mail. After ripping apart the workshop, rifling the desk, emptying the contents of the trash cans and checking the underwear drawer (don't ask), I was about to collapse in a fit of regret.

But wait a minute... what about my briefcase? Yeah... that's it. I'm always stuffing crap in there!

I dash downstairs (scaring the hell out of the dogs) and leap toward the briefcase. And yes, there in the sidepocket are the two precious scraps of paper... the Express Mail receipt (with tracking number... YES!) and my copy of USPS Customs Declaration and Dispatch Note (a.k.a. Form 2976). I hold them to my breast mumbling to myself as I head back upstairs.

My gives me a look that says, "Having one of those idiot moments, Kenny?"

I tracked the package online and found out that it was delivered to Belgium on February 23rd. What's happened to it since is anybody's guess. But I've emailed the buyer and I'm hoping the Professor is at his local post office or that mail within Belgium is just a lot slower.
Posted by Kenny Croes 0 comments 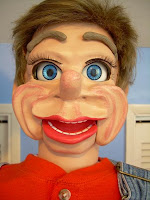 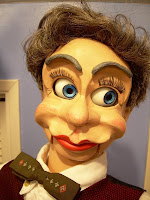 "Dudley" (right) has gone to the highest bidder on Ebay. The winner lives in Spain, so he has a long journey ahead of him. "Professor Jeebers" (left) was purchased by a fellow in Belgium. He arrived there last week. He must have been a hit with his new mentor because the buyer also bid for "Dudley", though he lost out at the end.

I'll miss these fellas. (I always do).
Posted by Kenny Croes 0 comments 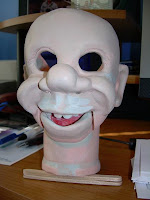 This little fellow makes me smile every time I look at him. He's in the early stages, but I hope to retain his optimism until the last touch-up. Right now, he's received his first coat of paint. As is my routine after the first coat dries, I examine him for rough spots and re-sand until he looks better. Then I do it all again. He doesn't have to be perfect (I like the little imperfections), but he needs to look good from 10 feet away. When he's ready, I put several coats of flesh tone on him, then apply the dark brown eyeliner, the pink interior of the mouth and the white teeth. (The jaw is not actually permanently attached at this stage).
Posted by Kenny Croes 0 comments