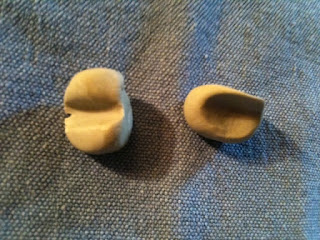 Okay.  What are nubs?  Well, I don't know what else to call 'em.  Nubs are made of Magic-Sculpt and are platforms for the jaw's axle tube-ends to rest upon.
In the photo, the one on the left is the top-side where the tube will rest.  The one on the right shows the bottom side.  The sharp edge will be sunk into a small glob of Magic-Sculpt on each side of the head's interior.  The solid nubs will be moved around in the soft Magic-Sculpt until the jaw finds its proper free-swinging position.  The globs of Magic-Sculpt will dry and secure the nubs in place.
Nubs.  Easy to make.  No baking required.
Posted by Kenny Croes 0 comments 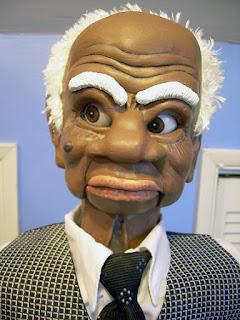 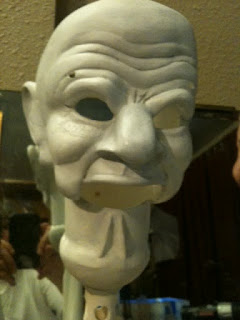 About 2-1/2 years ago I made a black Mr. Winkle (photo on right).  He was purchased by a fellow who lived in Spain.  Not confident in the Spanish postal system, he requested that I ship the figure to an address in Austria.  Well, Mr. Winkle ended up in Australia.  It took a few months to rescue him and redirect him to yet a new address in the U.K.
To make a short story longer, I've been asked to build a similar version of Mr. Winkle (photo on left). His new partner will be dressing him in a 19th-century police uniform. (I guess he'll be an old cop with an attitude).

Hopefully the journey to his new home in Canada will be more direct.
Posted by Kenny Croes 0 comments 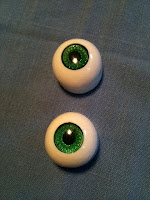 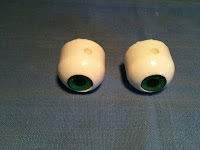 Braylu Creations has developed a new design for 1.25" eyes.  These are the ones that work well with 2T figures.   They are a significant step up in quality over the previous Braylu eye design.  These eyes have a flat back with a center mark for drilling post or spring holes.  Notice that the axle holes are pre-drilled in the perfect pivot spot.  These new eyes also have a glossy, smooth flawless finish. I really like 'em!
Posted by Kenny Croes 0 comments

Can you hear me now?

Vent Haven Museum was the location for a commercial shoot for a cell phone company. It's a cute spot. 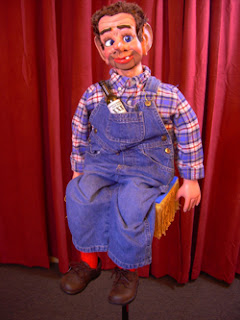 Otis keeps his right eye cocked so he can keep a constant lookout for the Sheriff.  His left eye wanders.  So does his train of thought. The label on his homemade hooch reads... KNOWN SIDE EFFECTS:  SLURRED SPEECH, LOSS OF BALANCE, ACTIN' STUPID AND OVERNIGHT STAYS IN JAIL.  He'll be huntin' for a drinkin' buddy soon on Ebay.
Posted by Kenny Croes 0 comments

Conversion is actually a Pro-Version 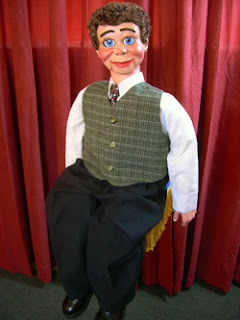 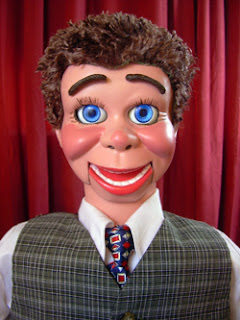 Most of the figures I build and sell are from my stable of characters I sculpted.  But some folks like my conversion figures constructed from Charlie McCarthy dolls. They're a bit less expensive, but still have the same professional innards as my other figures. He's marketed on my website as "Stanley", but I bet his new partner will give him a new name. This little fella is being shipped to Delaware this morning.
Posted by Kenny Croes 0 comments

Waste not want not 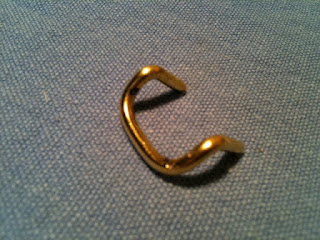 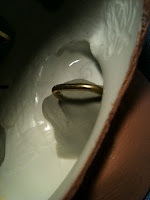 I usually use 1-inch-long screw eyes through which I thread my control cords.  But I ran out.  I couldn't bring myself to run down to the hardware store and buy a small packet of them. They're rather expensive when purchased in small quantities.
I use a lot of 3/32" brass rods for various parts of my mechanics.  I always have a bunch of short extras and I've built up quite a collection.  So I took a couple of them today and bent them into the configuration you see on the left.  With a little Magic-Sculpt, I attached them to each side of the head's interior.  I think they'll make excellent guides for my cords, plus I'll use up a lot of brass that otherwise might be wasted.
Posted by Kenny Croes 1 comments 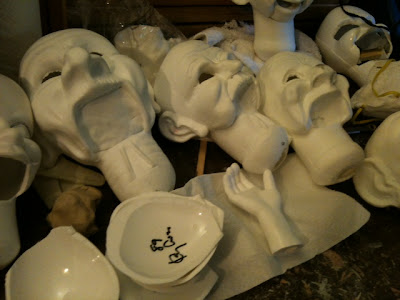 Seems a bit overwhelming sometimes, but I have a lot of work to do.  Most of these heads require the "dirty" part of my job... head prep.  This includes drilling and sawing orifices, smoothing out the orifice edges, roughing up the head interiors so the Magic-Sculpt will stick, sanding the exteriors so the primer and paint will stick, filling imperfections in the casts, and installing head sticks.
Then the real fun can begin.
Posted by Kenny Croes 0 comments 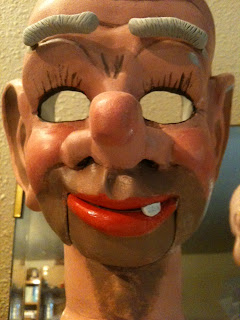 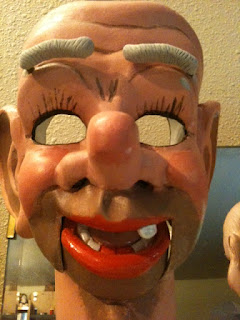 Just for fun, I swapped out a Henry jaw and installed it in an Elmore head.  It took some nip and tuck to do it, but I really like the way it altered Elmore's look.  I have a few more alterations to add to this version of Elmore.  You may notice that his nose has grown (better appreciated in a profile shot).  He's in the home stretch, so he may end up on Ebay soon.
Posted by Kenny Croes 0 comments 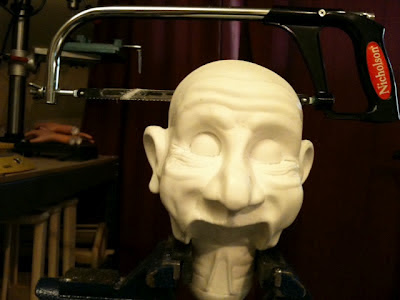 I got phone call while in the middle of sawing off the back of Uncle Earl's head.  After the conversation, I turned to look back at my project and caught this view.  Thought I'd share the moment.
Posted by Kenny Croes 0 comments 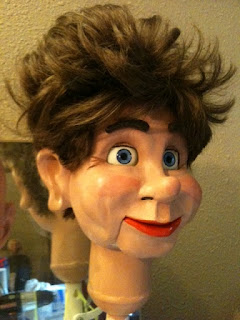 Now, it looks like I hid in the corner, then jumped out and scared the little fella half to death.  But actually it's a case of popping the top to make a repair.  I had a sticking jaw problem with my very first Jackie figure.  Since it wasn't my intention to sell him, I procrastinated doing the repair.  But I've finally lit into the guy and begun fixin' him up.
I kinda like his hairdo.
Posted by Kenny Croes 0 comments

Uncle Earl usually is bald with grey or white hair around the rim.  However, a client ordered Earl with a different look.  He has a full head of shoulder-length black hair. You may recall that I posted about working with a Braylu muscle body.  Well... guess who has muscles.  Yep.  Uncle Earl.
Though Earl is wearing "civies" for his journey to his new home, his new partner tells me she will dress him in a Ninja outfit.  I'm anxious to see what kind of personality she has in mind for this old fella. 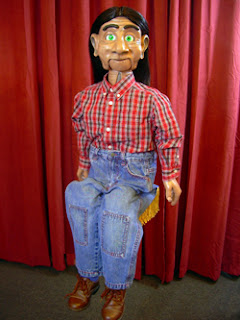 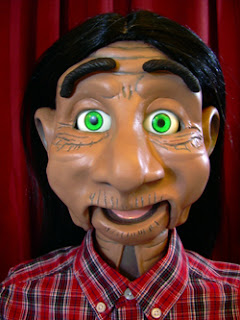 What's with the Dummy?

One of my figures got a starring role in a little movie titled "What's With The Dummy". The film was produced in 2010, but I just discovered it. It's a charming story.  The filmmaker was Eduardo Miyar.

I can hardly weight

The VentHaven Convention is coming up soon.  Here's another episode of the Cincinnati-KY Airport Marriott accomodations.  (I probably won't be in the weight room).
Posted by Kenny Croes 0 comments

The ornery old curmudgeon is at it again.  He's looking for a knee on which he might sit upon and complain incessantly.  He can be avoided on Ebay.
Posted by Kenny Croes 0 comments 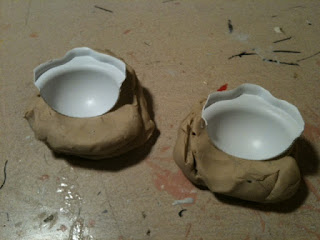 I bet you thought I'd given up on the blinkers idea. Well... it's crossed my mind a time or two to toss the whole kittenkaboodle in the trash. But I persevere thanks to tips from other builders.

The first tip comes from Al Stevens. He recommends Zap CA glue because it works with styrene. Mike Palma suggested ordering the Zap CA glue with kicker. I think it goes something like this... the glue is sticky on first application, but the bond isn't permanent until you apply the kicker. That's a good thing when you're trying to line up two things before you glue them together. Haven't tried it yet, but that's how I'll do it.

The next tip comes from Buzz James (famous Braylu entrepreneur). We were Skyping the other day when I told him I was concerned about the blinker gluing process. How can I hold the blinker shells and the wire together without gluing my fingers to the whole thing? He said to sink the blinker shells in clay. Then line up the wire to the blinker canals. I bet I can even do it so that the wire rests in the canals. Then apply the glue. Haven’t done it yet, but that’s how I’ll do it. 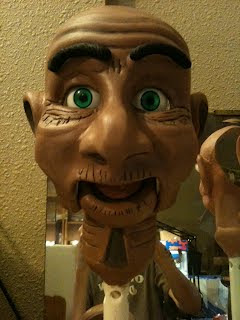 I'm working on a full-size Uncle Earl for a client.  The more I build the full-size characters, the more like it.  First of all, the heads are so large, it's much easier to work on the mechanics.

As far as this version of Uncle Earl goes, I love the color mix of his Afro flesh-tone paint.  It looks so rich.  Basically it's white, burnt sienna and raw umber.  Good thing I got some left because I just got an order for an Afro Mr. Winkle.
Posted by Kenny Croes 0 comments