Stick to what you know

I removed the original headstick (a PVC pipe) from the Lovik figure so I could replace it with a wood dowel. I intended to rout a channel in the dowel for a brass-tube-and-rod eye control mechanism. But I realized that attaching a wood dowel securely, making room for cords to pass through the point of attachment, and other issues would be difficult. Then I figured out that if I cut the bottom of the neck in the right place, I could use a Braylu headstick. I have one already tricked out with enough holes, triggers and an eye control mechanism. And as you can see, it will probably work out just fine. I'll do some paint touch-up on the neck and I'll use Magic-Sculpt to contour the neck-headstick contact point.

Another advantage is that the interior of the head will now be completely empty so I can insert my interior mechanics without restriction.
Posted by Kenny Croes 0 comments

Blockhead on the block 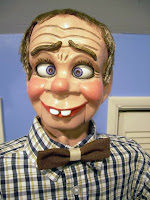 Herman is ready to do your bidding should you decide to participate in his bidding. He awaits your expressions of friendship on Ebay.
Posted by Kenny Croes 0 comments

The Craig Lovik figure I'm refurbishing came with the original control post (aka headstick). It's a PVC pipe. Since the only mechanical animation on the figure was the moving mouth, there was just one hole in the pipe and one hole in the neck area to accommodate the cord. Because I want to add side-to-side eyes and raising eyebrows, I've decided to remove the post. I couldn't figure out a way to attach a brass rod and tube system to the PVC pipe for the eye movement without removing it. But now that it's unattached, I figure I'll just replace it with a wood dowel because I know how to set up a wood headstick for the animations. Another reason to replace it? The length of the PVC pipe inside the head was restrictive. Now I can make the post a more convenient length.

He's pigeon-toed, scared of girls and stutters when he's nervous. But Herman is a very lovable character and he needs a place to live. He's open for suggestions.
Posted by Kenny Croes 0 comments 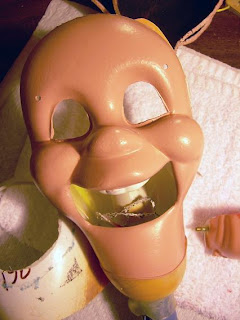 This time the subject is the Lovik figure I'm refurbishing. I've taken the little guy apart and cleaned him up a bit. I repaired the hole in his upper lip. I've disconnected the spring and removed his jawpiece. The brass axle was secured with hot glue, so I've peeled away the old glue. I drilled two holes in his forehead for installing raising eyebrows. I've also repainted his face and jaw with three coats of acrylic so far.
Posted by Kenny Croes 0 comments

Is it a good idea to sand the Braylu hands before painting? Yes, but very lightly. I use a 400-grain sandpaper so I don't scratch them up. Acrylic paint sticks to the hands quite well. I haven't had them chip yet and I've banged them around a bit (by accident, of course).
Posted by Kenny Croes 0 comments

I purchased a figure built in 1995 by Craig Lovik. Though obviously well-made, the cute little fella is a bit road weary. One of his hands is unattached. His face is scuffed up and he has a small hole in his upper lip. The guy's wig is also in need of replacement. His only mechanical animation is a moving mouth, which after 13 years has begun to stick.

My plan? Give him a second lease on life. I've removed the wig and the back of his head for a peek inside. I've devised a plan to give him side-to-side self-centering eyes, raising eyebrows, and possibly crossing eyes, too. I'll also replace his hands with some new Braylu Creations hands. He'll get a new paint job, new clothes, and eventually a new home.

In the spirit of recent electoral events, I decided to embrace change. So I revised the color scheme of "Vent Into The Mic" to match the look of my newly-designed online store. Hope you like it.
Posted by Kenny Croes 0 comments

To answer the question from my last blog entry:
The 2T hands from Braylu Creations (pictured below) are not made from the flexible material. Rather, these are made from a hard urethane plastic. They are hollow and very lightweight. I use M. Graham-brand artist-quality acrylic paints. M.Graham paints are not typically available at craft stores, but are usually found at art supply stores. I have found that three coats covers quite well. I don't use a primer coat because of the noxious fumes. However, if one were to use a primer coat first, two coats of acrylic paint would likely do the job.
Posted by Kenny Croes 2 comments

My hands are dry 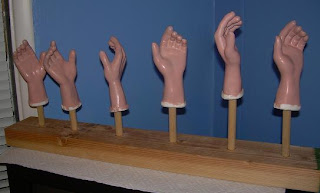 Oh, look. I made a hand drying rack from a 2-by-4 and a 48" dowel. Believe me when I say, this is custom woodworking for a guy like me. Plus this gives me another opportunity to brag about the quality of hands made by Buzz James at Braylu Creations. All my figures now have them.
Posted by Kenny Croes 3 comments

New look on the web 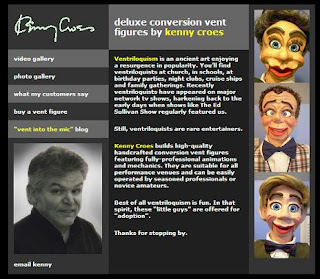 I spent a good part of yesterday redesigning my online store (a screenshot of the home page is pictured above). Web design can be an obsessive, minutae-laden exercise. But I really wanted to add more detail and photos to my store. In addition, I replaced "Uncle Ferd" with "Arnie". The latter seemed to garner more positive comments than usual. I also wanted to add crossing eyes as an upgrade option since I've figured out the technique.

The downside of web design is that I stay up far too late and eat far too little. My eyes blur and bug out from staring at the computer monitor for so many hours in a row. 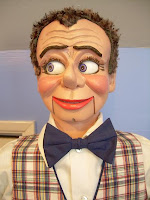 A grandmother will be forwarding "Arnie" to the North Pole so Santa can deliver him to her grandson this Christmas.

Wow. What a nice Granny!
Posted by Kenny Croes 0 comments 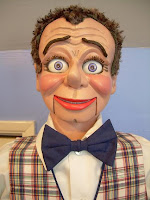 Just like the TV commercials say, it's the "final days" of Arnie's auction on Ebay. It'll be fun to see where in the world Arnie will call home.
Posted by Kenny Croes 1 comments

For some folks, Halloween is their favorite holiday. For me, it's the day after Halloween. That's when all of the Halloween stuff is marked down 50% or more. I spent the morning raiding the Walmart and Kmart shelves. I scooped up about 20 wigs and some really cool vampire teeth that will work out great in my dummy building.

I just love it when the prices have been SLASHED!
Posted by Kenny Croes 0 comments