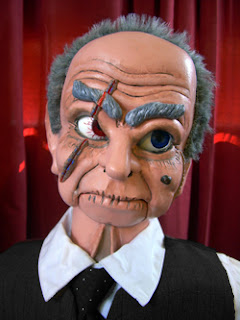 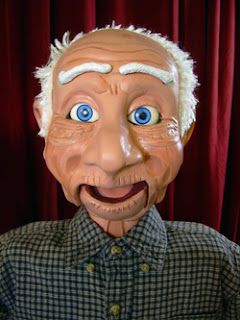 "Just wanted to drop you a line, and let you know Mr. Blue is a real hit at the senior center. Patty my wife plays the piano there. Well I got talked into a short 7 minute act. Bottom line is I appreciate both Uncle Earl and Mr Blue. Just wanted to say Thank you again. - Wayne"
Posted by Kenny Croes 1 comments

Will work for laughs 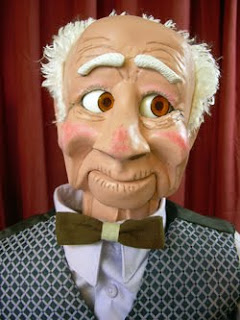 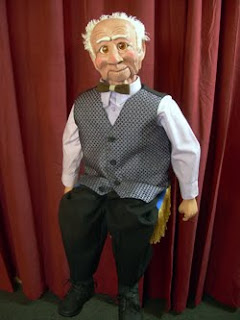 "Uncle Earl" has been one of the most popular characters I make. He has this clueless aura about him. This one was built using the new and improved mold. We wore out his original mold. I didn't make many changes to the new model. I added loose skin along the sides of the neck and re-designed the jaw.

Uncle Earl insists on leaving the workshop. So he's looking for a foil on Ebay.
Posted by Kenny Croes 0 comments 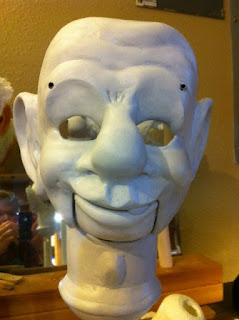 I keep saying this is the last "Otis the Moonshiner" character I can make from an Elmore head. But I received a special order for the feller, so here we go again. The mold has been officially retired, but we keep squeezing out one...more... casting. The head has taken a lot of prep work, but I'm pleased with how he's turning out.

I just gave him his coat of primer. After a primer coat, I always see a few areas I need to touch up. Either fill or sanding. Fortunately there are only a couple small spots that need attention. Then the fun painting begins.
Posted by Kenny Croes 2 comments

I wanna be a spaceman 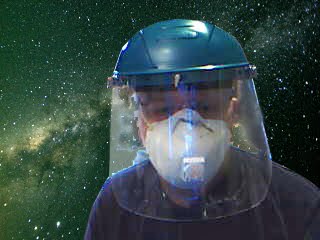 When I was a kid I read Robert Heinlein and Issac Asimov.

When I was in 4th grade (1958), I had an argument with my teacher when she predicted that we all might visit the moon within our lifetimes. I felt obligated to correct her. We already were on the moon. I saw Rocket Bob go there every afternoon on local TV.

I was an avid (and still am) Star Trek fan. Loved Star Wars (the first three, anyway). I really enjoyed the later Battlestar Gallactica series. Frackin' great.  Of course, the best SciFi series ever in my opinion was Firefly. Yep, I'm a Browncoat.

So I was delighted when I looked in the mirror and saw my reflection in this new protective head gear.

What should I use?

Q: May I ask what is a good sculpting material... Magic-Sculpt or Apoxy-Sculpt?

A: It all depends. (How's that for a definitive answer?)

If you must ship your model to a mold maker, then I recommend you use PaperClay.

The downside of using Magic-Sculpt or Apoxy-Sculpt (or the new option Free Form Air) is that you only have about 20 minutes max of malleability. I wouldn't recommend it for a full-blown sculpture. The products are great for limited additive sculpture on an existing head and for securing mechanics. Too much and they add objectionable weight. Free Form Air is much lighter, but you still have limited time to work with it.
Posted by Kenny Croes 0 comments 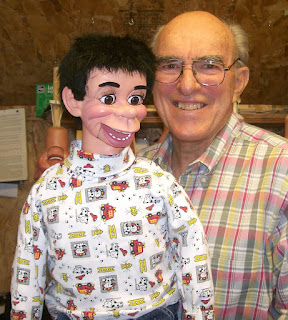 I never met Clinton Detweiler in person, though like many people, I thought of him as a friend. I sincerely doubt I would be as deeply involved in vent figure building and the vent community in general if it hadn't been for this kind and generous man.

About nine years ago I got the itch to renew my interest in ventriloquism. So I bought a figure from Clinton. And  like I was six years old again, I was hooked.

Over the years, Clinton freely offered advice and encouragement as I learned the craft of vent figure building. Like many others, I read his Newsy Vents blog, and later Mr. D's Daily blog, every single day.

I was looking forward to finally meeting Clinton and his wife Adelia in person at this year's Vent Haven Convention.They are so deserving of the tributes planned for them. I suspect those tributes will still move forward.

The loss to the vent community upon his passing is immeasurable. Clinton Detweiler set a high standard for living in this world.  If one's ticket to heaven gets punched by spreading love and laughter, then he surely has a ticket to ride.
Posted by Kenny Croes 3 comments 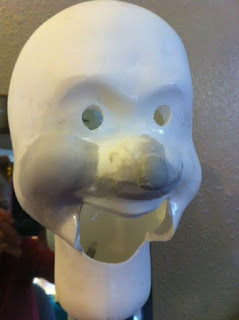 A good friend sent me this head he'd started. Time is always an issue with him (he's a very busy guy), so he sent me this project to finish. There really wasn't much more than a bump for the nose and some cheeks that weren't quite even. So as I've worked on a few other projects, I'd stick a little left-over Magic-Sculpt or Free Form Air on the end of his nose. I figured I'd make his nose rather large anyway. The only two things I've actually accomplished are his right cheek (Free Form Air) and I drilled a couple of holes for the eyes. I plan to make the eye sockets larger.

The jaw he sent is the most complete. All I have to do is fit it to the mouth opening and close the gaps. I enjoy these kinds of projects.
Posted by Kenny Croes 0 comments

Will build to suit 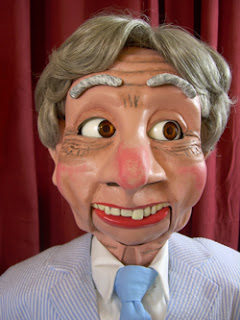 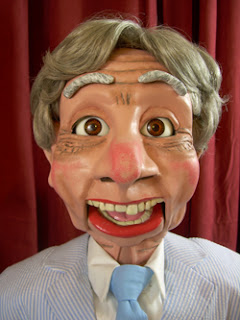 This old fella will speak with an Australian accent when he reaches his home in New South Wales. He's a special order from a client who asked for lots of teeth, salt and pepper hair and a nifty seersucker suit. 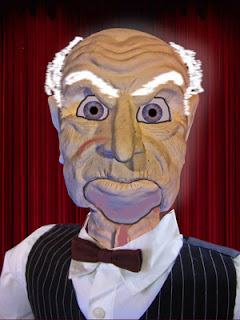 Using the most recent photo I shot of my full-size Mr. Winkle sculpture, I Photoshopped this future version of him. Based on this rendition, I decided to make a few alterations to his face. I discovered that his left eye was slightly too wide, so I narrowed it in the drawing. I'll also do that to the sculpture. I'm also trying to decide if he looks mean enough. I may arch his eyebrows a bit more. 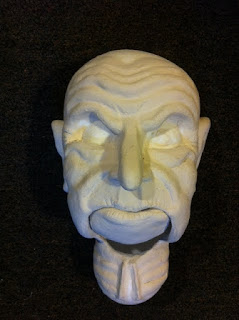 I finished both ears on my full-size Mr. Winkle sculpture. Now I've moved on to the jaw. I set the jaw in the head so it opens and closes freely. Then I sculpted the jaw's lip and chin. Next I'll sculpt the area below the chin and fill the gaps.

I plan to etch some wrinkles under the eyes in the hardened Paperclay. I'm hoping that'll be fairly easy. I'll use some carving tools. After that comes the sanding and touch-up.

The final step will be too pull the jaw out and close the jaw opening in the head. (The jaw will be cast separately). I'll also close and seal the trap door.  Then it's off to the mold maker. 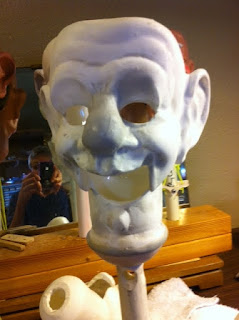 Otis grew a nose. Not because he told a whopper. But because he really needed one. (Since he's a Moonshiner, he may tell whoppers after he's completed.)

I used Free Form Air for the nose. I mixed it, used some right away for filler on another project (works great for that), then sculpted the nose after the chunk firmed up a bit (about 20-30 minutes). 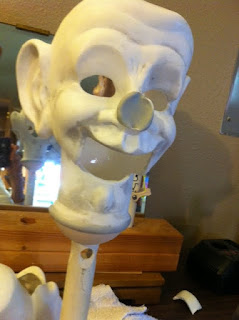 I received an order for an "Otis, The Moonshiner" character. I've made several before, each a little different than the last. Because we've almost reached the end of this casting, more prep work has been required on this fella. But that process always opens up possibilities of additive sculpture to customize the figure in some way. In this case, I'll build a new nose. I'll also mess with the jaw.

The client has requested that this guy's goof-quotient be enhanced. He'll have one permanently crossed eye.
Posted by Kenny Croes 0 comments 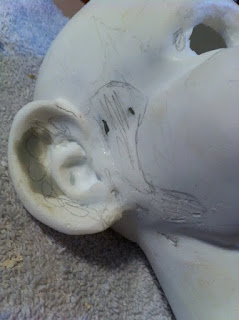 There are a lot of steps to prepping a casting before the real fun starts. As a mold begins to wear out, each successive casting picks up a few more little imperfections. These require filling, grinding and sanding. I use a #2 pencil to circle and mark the areas that need attention. 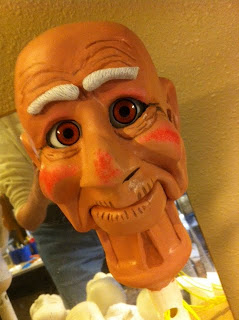 A good deal of the day was spent organizing my workshop. (Things can get out of hand so easily). I bought an additional parts caddy and printed labels for most of the drawers. I also re-organized the drawers. Boy, was THAT fun! But going forward, it'll take a few nanoseconds less locating everything from nubs to nuts, springs to spacers and everything in between.

By the way, I'll have a new 2T Uncle Earl ready soon. This is the first one using the new and improved casting and jaw. Much less prep work was required on this casting. Nice!
Posted by Kenny Croes 1 comments 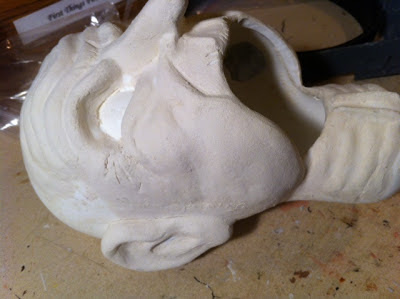 My full-size Mr. Winkle sculpture got an ear today. Actually it took a few days to make it. First I wrapped the Paperclay around the outside edge of the Styrene. I let it dry. Then I added the ear's interior. I may do one more application of detail before I move to the other ear.

I'm looking forward to working on the jaw. (I have a plan).
Posted by Kenny Croes 0 comments 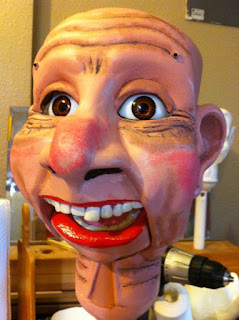 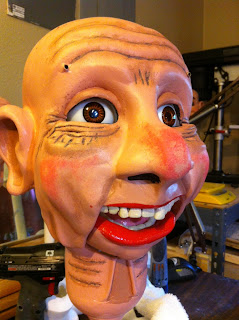 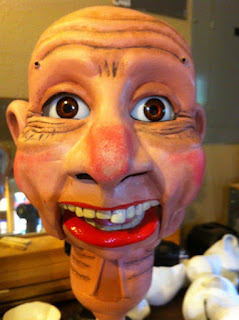 My full-size Uncle Earl project has moved a few steps closer to completion. I've just about finished with the facial detail painting. For the teeth, I ordered an Austin Powers buckteeth appliance. I sculpted the two teeth on each side of the Austin Powers teeth to fill out the mouth. (The teeth show even when the mouth is closed). Rather than use the jaw that came with the Uncle Earl casting, I used a Jackie jaw and altered the chin quite a bit. This figure will eventually have grey eyebrows and a full salt-and-pepper wig. As the client has requested, he'll be dressed in a light blue seersucker suit.
Posted by Kenny Croes 2 comments 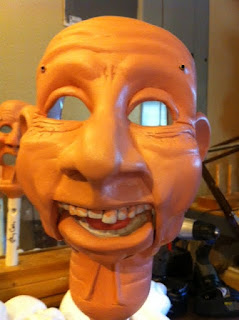 Now that the New Year has arrived, I'm back at work. I finished the additive sculpting on my Uncle Earl project. I've painted his coats of fleshtone and I'm ready to start detail face painting. His mechanics are almost finished and nearly ready to install. Things should go pretty quickly now. A couple more weeks and he'll be on his way Down Under.
Posted by Kenny Croes 0 comments