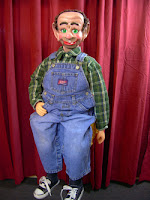 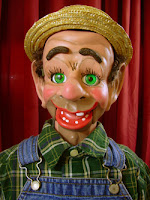 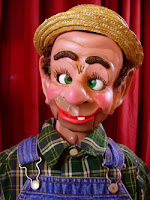 This handsome devil is another variation on "Otis, The Moonshiner". The goofy guy has lost his hair (probably from worry that "them Revenuers" were gonna get him). He will soon be available for adoption on my website as an "In Stock-Ready To Ship" item.  If you decide to buy him, he really won't be any trouble despite the warrants for his arrest.
Posted by Kenny Croes 2 comments

Between building dummies that have been ordered or are headed to the Ebay auction block, I don't sculpt new figures as often as I'd like. But I have moved forward on this 2T figure. This little guy will hopefully become a cute little kid figure.  I'm pleased with the way the nose turned out.  The eyes will get more attention to detail, but the basic shape has been established.  The next step will be to sculpt the upper lip and cheeks.

I'm using PaperClay.  As I mentioned in an earlier post, I painted the urethane armature with Elmer's Glue so the PaperClay would adhere to the head.  Seemed to work well.
Posted by Kenny Croes 0 comments 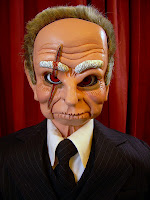 Earlier this year I built a special version of Mr. Winkle for filmmaker Bryan Nest. Mr. Winkle was to appear in a fan film as a well-known super hero's arch enemy, Scarface.

Young filmmakers like Bryan Nest post a short film proposal (essentially a pitch on film) on a website called Kickstarter, a site designed to attract financial support for the making of film projects. Each film proposal is given a specific length of time to reach their financial goal. If the goal is met, the film is made.  If the goal isn't met... well... I'm not sure what happens then.

In any case, the pitch film features Mr. Winkle as Scarface. The proposal didn't make its goal in time, so I suppose the project is on hold for now. But the film proposal is still kinda cool and I thought you might enjoy watching it.
Posted by Kenny Croes 8 comments

I have landed on Krylon 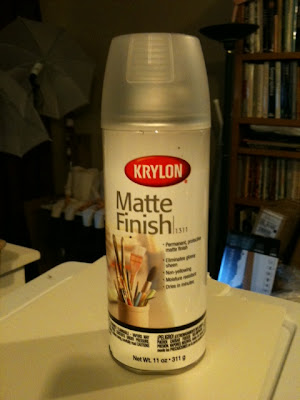 The can of Krylon Matte Finish may look like a rocket booster, but it's just a "new and improved" component of my dummy makin'.

I was able to look closely at figures made by builders I admire at the VentHaven CoVENTtion.  I was very impressed with the work of Albert Alfaro, Jimmy Eisenberg and Mike Palma. 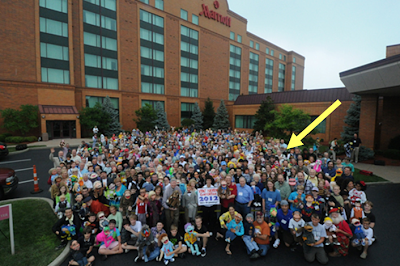 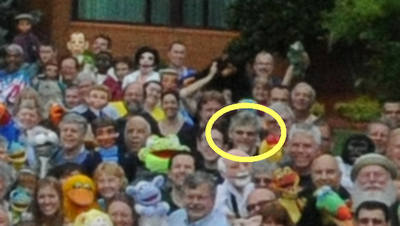 The official 2012 VentHaven ConVENTion group photo was released.  I'm standing toward the back right side of the group.  I didn't bring a figure to the convention, so it's just my head popping up among the 600-plus ventriloquists and their puppets who attended this year. I had to blow up the photo pretty large to find myself.
Posted by Kenny Croes 0 comments 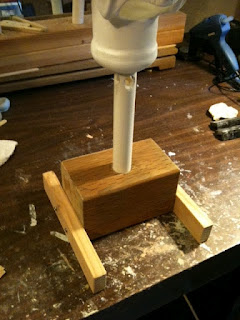 No, I'm not standing on my head.  But I am back in the shop after my trip across the country to the VentHaven ConVENTion.
I wouldn't be in this vent figure building business if it weren't for Master figure builder Mike Brose.  I read his blog and I refer to his figure-building books all the time.  He recently showed us  how to build a portable stand for working on figures.  Mine isn't as fancy, but it's quite utilitarian.  I have wood cut to build another one.
Posted by Kenny Croes 1 comments 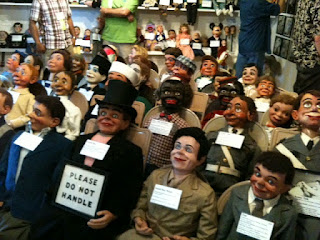 Today I visited the revered VentHaven Museum in Fort Mitchell, Kentucky. As expected, it was an amazing collection. Seeing the number and variety of figures was inspiring. I liked the hundreds of photos of ventriloquists on the walls almost as much as the figures. Jay Johnson was there graciously visiting with fellow visitors. We got to spend a few minutes chatting. I'm a regular reader of his blog and a great admirer of his talent, so it was special to share a few moments with him.

Jeff Dunham's lecture was very entertaining. He blended good advice with a preview of his upcoming DVD release. He's chosen a fun theme for his show and gave us a few minutes live with each of his most popular characters.

I head back early tomorrow morning having made many new friends.
Posted by Kenny Croes 0 comments 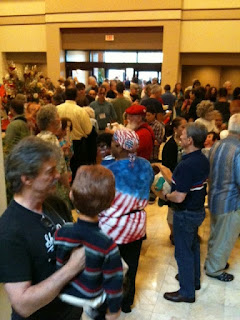 This photo was taken in the Marriott Hotel lobby moments after the annual group photo was shot outside. We all rushed back in because it started to rain moments before the camera actually clicked.

I attended two excellent workshops. The first was conducted by Mr. Puppet, Bob Abdou. He gave us some great tips and thoughtful insights into successful show building and puppet manipulation.

Alan Semok lectured on vent acting during a routine. He stressed the importance of reacting with facial expressions as the dummy talks and he gave us a clever exercise to practice.

The great Jimmy Nelson, filmmaker Neil Leifer and ventriloquist/Producer Gary Hunter premiered their 38-minute documentary "The ConVENTion". It was filmed at last year's convention. They hope HBO will pick it up like Mr. Leifer's previous documentaries. This year's convention crowd gave it a well-deserved standing ovation. 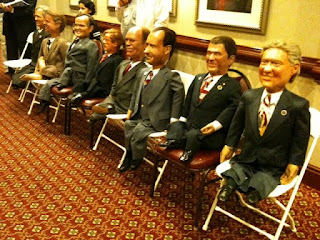 This is a display of ventriloquist Jim Teter's President figures. He and Taylor Mason did very funny shows last night. Taylor Mason also did an excellent lecture this morning on the business of performing and writing new material. Again today I met more folks I've been acquainted with online. Young Kevin Barnett, who performs with a figure I made for him, performed at the Junior Open Mic. He also gave me a shameless plug on stage. (Thanks, Kevin).

No photos yet because the convention restricts use of photos shot during the convention. I'll try to clarify the policy regarding my blogging. However, after a day of travel, the convention has been fun and interesting. I met a nice fellow from Kuwait who bought my first Elmore. I had a lovely conversation with Jimmy Eisenberg of Ventriloquist Sideshow. He builds amazing works of art that are also wonderful vent figures. I met Pete Michaels and wished him well on his America's Got Talent video vote. Hope he wins. I ran into vent figure builder Mike Palma. We'll visit more later. He has a Dealers Table here. Also met Dan Willinger of VentriloquistCentral.com in the elevator. I've also visited with several folks who say they read my blog regularly. Can't help but be flattered by that. Thanks! 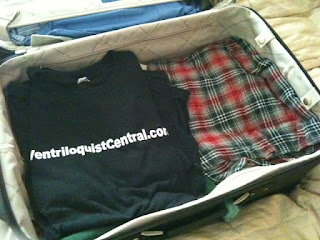 I'll be attending my first Vent Haven Convention next week. I'm looking forward to meeting many of the folks in person that I've only known online. I'll be there for almost the entire convention. I plan to attend several seminars and workshops. The performances should be really fun. On Saturday, there is a field trip to the Vent Haven Museum, and that will be a highlight of the trip, I'm sure.

There will be a Dealers Room where vent merchants will be selling all kinds of cool stuff. As you can see, I've left room in my suitcase to bring back souvenirs.
Posted by Kenny Croes 0 comments 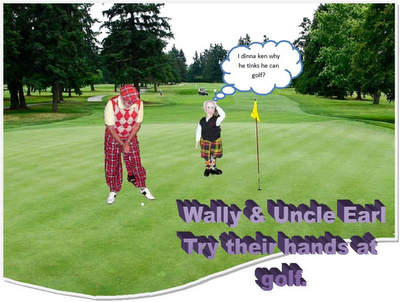 Wally is one of my best customers (and now online friend). He loves taking his figures, including Uncle Earl, out to the community at large to entertain whomever comes his way.  Occasionally I get photos of his field trip antics, some real... some, shall we say... "doctored".  This one represents the latter.    I hope all of my figures find partners who enjoy having as much fun as Wally.
Posted by Kenny Croes 0 comments

Where will all this lead? 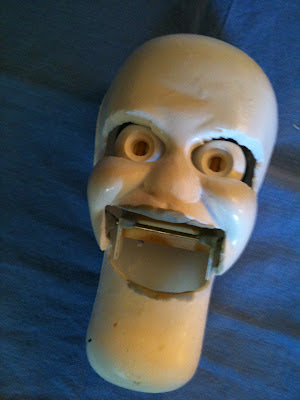 This scary-lookin' feller is my emerging armature for a new figure sculpture. I added the eye tray yesterday.   I have a good idea who I want to portray in this project. But I won't specify this early on because you never know what twists and turns might lead me to a different character.
My next step will be to put him on a headstick so I can start the application of clay.  I might use KleanKlay.  I might use PaperClay.
KleanKlay presents a challenge in that I'll need to ship him to Braylu Creations for mold making (if Buzz agrees to take the project). KleanKlay will dent in shipping unless I come up with a way to protect him with a coating or padding or both.
PaperClay hardens, so shipping the model is less likely to result in damage. But PaperClay doesn't stick to urethane very well.  Maybe I'll paint some Elmer's Glue on the spot where I want to sculpt, let it dry to a sticky consistency, and then apply the PaperClay.
(Feel free to weigh in.)
Posted by Kenny Croes 0 comments 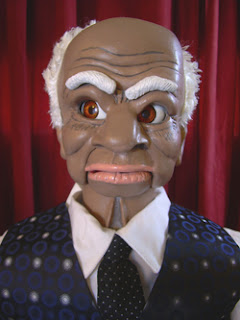 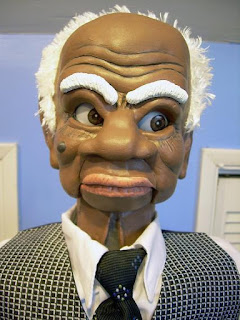 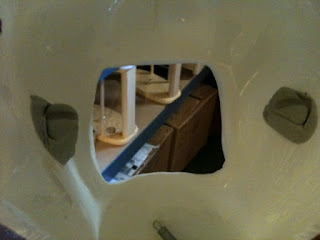 Nubs in action!  (Reminds me of "Pigs in space!".)
Actually its far less dramatic. Nubs, you may recall, are pre-formed platforms for the jaw axle tube-ends to rest upon. This is a photo of the nubs installed in a head.
And that's nub-ology.  Nubness.  Nub-bub!
Posted by Kenny Croes 1 comments 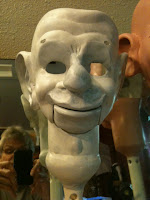 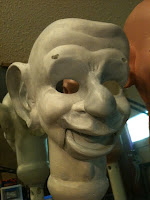 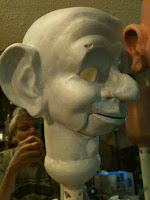 I did a little facial alteration on this Elmore head.  (I believe he's one of the last).  I changed the nose, enhanced his upper lip area under the nose, and reshaped the jaw. He's seen here after his first coat of primer.  The primer makes the acrylic paint adhere, but it also shows the flaws that need to be corrected. A little sanding here, a touch of grinding there, and a bit of fill for good measure.
After that, he'll get his first coat of flesh tone.  Then we really begin to see who this fella is.
Posted by Kenny Croes 1 comments 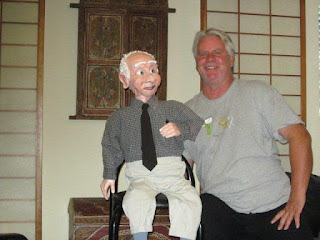 It always gives me great satisfaction to see one of my little fellas with a happy new partner. My full-size Uncle Earl now resides in California with his pal Wayne. From the looks of it, I think the two of them will get along just fine.

Wayne said he's particularly pleased that there's finally someone in the house who looks older than him.
Posted by Kenny Croes 0 comments 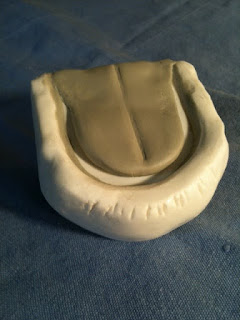 The last step has been completed.  After the tongue dries, I'll do a little touch-up sanding and then it's off to the mold-maker.
Posted by Kenny Croes 0 comments 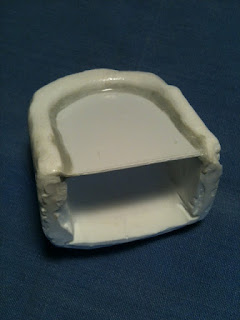 After hollowing out Uncle Earl's formerly solid jaw, I've added a piece of flat styrene plastic.  I used Magic-Sculpt to secure the styrene in place.  After it dries, I'll add a tongue.  No teeth because all of Uncle Earl's have fallen out. 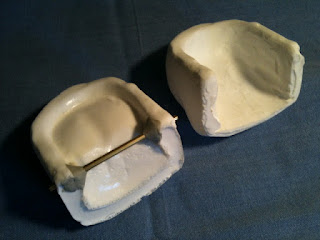 The original jaw for the full-size Uncle Earl was a solid piece of urethane.  A little too heavy, I think.  So I've used a Dremel saw, a chisel and hammer, and a Dremel grinder to hollow it out.  I'll add a thin flat piece of styrene across the top for the tongue to rest upon.  The center portion will remain hollow.  The remodeled model will be used to make a new mold.
By the way, I killed my Dremel doing this.
Posted by Kenny Croes 1 comments