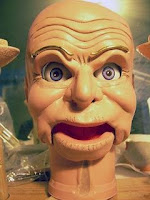 I'm making my first mean guy. I'm concerned he'll look too mean. But he's been fun to make so far. I hope to have him ready to insult people within a week or two. 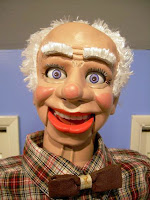 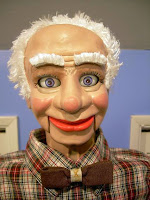 I've added another member of the "family". I call him "Uncle Morty". He represents a couple of new approaches to my conversion figure making. He's available now on Ebay and looking for an audience.
Posted by Kenny Croes 3 comments

Not an original title, but it describes the instruction manual I've been writing. I plan to include it with each vent figure I sell. "Civilians" almost universally think that ventrilqouism is a mystical and difficult art to master. But actually it's very easy to learn. It just takes practice, practice, practice. When I was a six-year-old, I used to practice my lip control holding a small hand-held mirror.

The nuances of performance and character are actually the deepest part of the art form and the most difficult to learn. The lip control is the mechanical and simplest part. I firmly believe that a good act and great character trumps lip control issues every time. Edgar Bergen is my best argument for that opinion.

So look for my Kenny Croes ventriloquism primer in the near future. (Though I wouldn't be scanning the New York Times best seller list).
Posted by Kenny Croes 0 comments 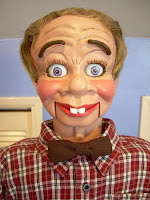 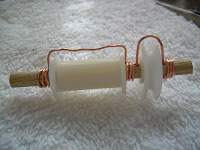 I learned to make a jaw pulley from Al Stevens' Fred Project. Now that I use the same pulley axle for the crossing eyes, I've added another plastic pulley (on the left) and placed plastic washers on either side to keep the cords from hopping over the pulley. This time I added a copper wire across the top, similar to the Al Stevens method across the top of the jaw pulley (on the right). The cord in the jaw pulley is usually very taut. However the eye-crossing cords get slack when the eyes are moved side-to-side. This new set up will tame those slack cords.
Posted by Kenny Croes 0 comments

"Augie" placed his resume on monster.com. He registered at the local unemployment office. He also filled out an application at a temp agency. He'd probably have a job by now if he hadn't written in the box "occupation" the word "goofball". Now he has a day left on Ebay to find gainful employment. 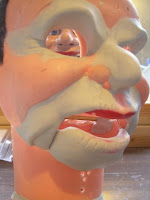 I'm always looking for new ways to alter Charlie heads to create new characters. I've been paying attention to Star Trek. Why? Because the make-up artists use "appliances" to configure aliens. I've noticed that sometimes it only takes the application of a bit of plastic on a portion of the face to make all the difference.

The old grouchy guy I'm making is an example. I'm keeping the cheeks and nostrils. But I've added the bridge and center part of the nose. The lower part of the face was done by trimming the edges off the corner of the jaw. Then I temporally mounted the jaw piece in the head. I added Magic-Sculpt to the lower part of the face to contour to the trimmed jaw. Now he looks like he's always frowning. I also made jowls. 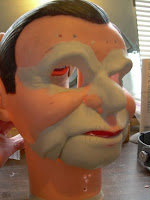 Yeah, I know that's a question I ask myself all the time.

But actually it's also the name of a blog by ventriloquist John Mhor Gunn. (You'll find the link in my list of blogs). He's embarking on a project to build a conversion figure from a Danny O'Day. If he's anything like me, an encouraging word from a fellow ventriloquist and/or vent builder is helpful. So, please check out his blog from time to time and offer up some pleasantries. 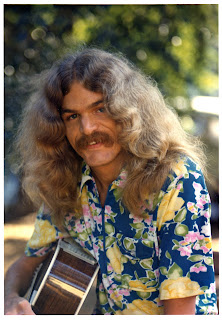 I enjoy reading Jay Johnson's blog "The World's Is A Stage". He tells wonderful show business stories. Recently he told us about his final audition at ABC that won him the famous part on "Soap". He also published a copy of the Variety ad for the first casting (cattle) call for ventriloquists, which was held at CBS in LA.

I was at the initial casting call at CBS. My aunt, who was an acting teacher in LA, told me about it. At the time, I didn't use a figure or puppet, but rather sang a tune without moving my lips as a closing bit of my singer-songwriter act. (It was the same bit I did as part our street act in San Francisco when Harry Anderson and I were partners.)

I'd never seen so many ventriloquists and vent figures in one room as I saw that day in that Rehearsal Hall at CBS. A sea of ventriloquists! I recall the ad asked for someone 20-30 years old, but I saw vents much older and much younger than that. I remember one older guy with a Greecian Formula-dyed butch haircut and loud plaid jacket was saying how much younger he'd look on TV.

Eventually I was called in to a small room or curtained-off area (I don't recall which) to audition, which didn't last long. I had hair down to my butt and no dummy. Right away they eliminated me and I didn't even get to show 'em my act. But they were very polite, which I appreciated because I was also very nervous.

And of course, we all know who won the part. Obviously those casting directors knew what they were doing.
Posted by Kenny Croes 2 comments 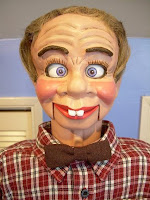 He just thinks he is.

Soon he'll be searching for someone to convince. Look for this feller with the giant combover on Ebay in the near future.
Posted by Kenny Croes 4 comments 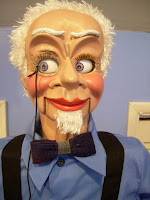 The Professor will be learning a new language. He has found a home on the far side of Europe. He will call Turkey his home from now on. I will miss him. He was fun to talk to.
Posted by Kenny Croes 0 comments