She actually did it! 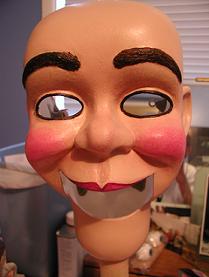 Earlier I doubted that my wife would make time to repaint the cheeks of my pro dummy building project. Well, I was wrong. She repainted them yesterday. She even shaded above the eyes. Nicely done!

Then she repainted the lips... in a much darker reddish brown! Looks good! She even lined the edges of the lips ala lipliner.

Meanwhile, I purchased my files and successfully hollowed out my Charlie's eye sockets. I also added ApoxySculpt to change his nose and upper lip. I placed a pulley inside his neck for new jaw mechanics.

However, the eyes are going to be a challenge. I bought some 1" hardwood spheres with one flattened edge and a pre-drilled hole. I can easily drill the hole through the rest of the sphere for the pivot screws. But without a drill press (remember, I'm not allowed power tools), I'm not sure how I'm going to drill a hole precisely in the middle of the back of the eye for the centering spring. Not to mention the iris on the other side.

That noise you hear is me scratching my head.
Posted by Kenny Croes 5 comments

My Charlie required another trip to the home inprovement store. This time I purchased a 3-in-1 saw set. I used it (instead of a power jig saw) to cut the trap door in his head and to have a go at his eyes. (Remember, I'm not allowed power tools). It took the saw, an exacto, and a small chisel to poke out his eyes. And now I need to go to the home improvement store again. This time I need a small round file to gently expand and smooth the eye holes.

I also figured out what the gouges above and below his right eye were all about. That's where the monacle used to sit.

Along with my Mike Brose-cast dummy project, I've purchased an old Charlie McCarthy doll and some Braylu parts to build a "semi-pro" vent figure. I figure I'd build it, then sell it to subsidize (and use up) the supplies I've purchased to build the pro dummy. Plus, I think I'll improve my skills.

The Charlie I bought is a bit battered, so he'll require some sanding, ApoxySculpt patching, and painting. I think I'll be able to salvage and use the arms and legs from the original. Since I have to ApoxySculpt a few dings, I thought I might as well alter his appearance slightly for practice. I'm actually excited (and intimidated) by the prospect of creating a different look.

This project will also give me something to do while the pro vent figure's paint dries.

It used to be a recording studio...

My office-slash-recording studio has turned into Gepetto's workshop. I have a half-made dummy, tools, , measuring devices, and body parts strewn across the room. Oh, and there's paint everywhere. This is new to me. I've always been a "neatnik" as far as my studio is concerned, but vent figure building has ended all that. It'll be a race to see whether the dummy is completed or I go nuts first. Obviously, I'll keep you posted. (Actually, I think I've already gone nuts, but that's a different story...)
Posted by Kenny Croes 4 comments

Dinner With The Bosses

I had dinner with my two bosses last night. They're from out of town, so they were curious about my ventriloquism adventures. They listened raptly while I regaled them with stories about my shar-pei dog "Chester", and my progress building a full-sized pro dummy.

At the end of the dinner, my big boss said, "Croes, you know you're wierd, don't you?"

"Yep," I replied. "I know."
Posted by Kenny Croes 0 comments

3 On The Same Block

There were these three ventriloquists who lived on the same street in Bakersfield in about 1962. No, there is not a punchline at the other end of this story. Jack Sharp, Officer Johnson (I'll call him) and me all lived on Doolittle Street at the same time.

I'd seen Officer Johnson on local TV and at school assemblies. Soon after moving to Doolittle Street, a neighbor who'd seen me and "Jackie" (my Jerry Mahoney dummy) perform, pointed out Officer Johnson's house. It took me several weeks to get up the courage to knock on his door, but I finally met him. First of all, he was a cop. Secondly, he was a grown-up. I recall being very impressed with the size and detail of his vent figure.

Later that summer a kid one year older than me, Jack Sharp, moved in down the block. Again, a neighbor told me that yet another ventriloquist lived on our street. I ventured down to his house and introduced myself. "So, you're a ventriloquist?" I said shaking his hand.

And without even a lip quiver, he replied, " I sure am, fella!"

I momentarily had an out-of-body experience as his voice seemed to come from somewhere faraway.

"I'm a ventriloquist, too", I said without moving my lips. And the same stunned expression that must have crossed my face a moment earlier crossed his face, too.

The three of us never got together at the same time even though we lived within a few houses of each other. Within the same year, Jack would move again to Monterey and I'd move to Eisenhower Street. But to this day, I think it's amazing that three ventriloquists could end up living on the same Bakersfield street at the same time back in 1962.
Posted by Kenny Croes 0 comments

I'm going to need a few tips. My vent figure's skin tone looks great. The eyes have been lined with Raw Umber and look good. The lips are an acceptable pink color. So, then I attempt to ripen the cheeks and nose with a little red.

I stand back, rub my chin as I consider her comment, and examine my dummy like a doctor trying to figure out a strange rash.

"I think I need to help you with this," Joyce says. I try to express gratitude, but I know she won't really make time to help since she has her own knitting and watercolor projects underway. I don't blame her a bit.

Today I will email Al Stevens, Glen Rappold, Mike Brose and Clinton Detweiler for advice on shading the cheeks. If anyone has any advice, please feel free to comment.
Posted by Kenny Croes 0 comments

What do you mean it's too red?

So I'm painting the lips of my Mike Brose head and jaw and I let it dry. A couple of hours later, my wife Joyce comes in and takes a critical look.

"He looks like a tranvestite. His lips are too red."

I'm crushed. Jerry Mahoney had real red lips. I tell her that.

"I don't care", she says. "He looks like a street walker.". Actually, she used a more colorful term, but I'll go with "street walker" in case some kid stumbles upon this blog.

So, because my wife IS a painter (watercolors), I decide to go with her recommendation. I repaint the lips and jaw a more subdued pinkish hue. It meets with her approval.

Wonder what she'll think about the blush and eyeliner?
Posted by Kenny Croes 0 comments

I'm not sure how it happended. Oh wait a minute. Now I remember. I moved to a small coastal town in Oregon and was tempted to perform again. I intended to just sing my little folk songs, but I figured I'd include a tried and true novelty bit from my old act. I'd sing the children's song "Red Light, Green Light" while frozen stiff in a trance. Used to blow their minds! More later on how the bit came to be. Well... the thing worked again... and 'poof'... a year later I'm building a vent figure with Mike Brose parts. I'm reading blogs by other ventriloquists and I'm checking Ebay every ten minutes for ventriloquism stuff. It's too late now... I'm hooked.

God knows what I've spent in tools and materials to build this dummy. I could have purchased one of those fine, professionally crafted figures with what I've invested so far. Makes ya wonder who's REALLY the dummy.

Meanwhile, I've been performing with a cute shar-pei dog named "Chester". I wrote an act from material I stole, borrowed and actually made up. And whaddya know... people actually laughed... and in the right places!

So, I'll be posting news about my adventures as a performer and builder. I'll try to be interesting and controversial enough to warrant a comment or two from my fellow vents and fans of ventriloquism.

Thanks for reading this far...
Posted by Kenny Croes 0 comments